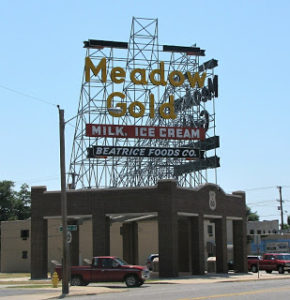 Packed in to the Improve our Tulsa package is $2.5M to make improvements to East 11th St., between South Peoria Ave. and South Utica Ave., a one-mile stretch of the restless ribbon that we all know and love as old Route 66.

This legendary corridor lies between Tracey Park and the controversial Pearl District QuikTrip, and is home to the Corner Café, the Meadow Gold sign, Lola’s awesome and vintage aluminum food truck, the new Ike’s Chili, and about six blocks of historic buildings, many of which are being renovated, with new businesses moving in – a trend that is creeping eastward on 11th St. to Lewis & Harvard Avenues.

Earlier this month, Douglas Helt, Lead Engineer for Tulsa’s Transportation Engineering Services Department hosted a meeting at the Tulsa Garden Center to present two ideas for the re-design of the street.  Currently the street is 4-lane, with 12’ lane widths.  Despite having 6’ sidewalks on both sides of the street, most would not consider this area to be particularly pedestrian-friendly.  Folks who are familiar with the work of Charles Marohn, founder of Strong Towns, would call this stretch a “stroad” (neither a street nor a road) because of its wide lanes and relatively fast speed limits.

It’s encouraging that the city seeks a better solution.  Both plans presented by Helt, designed by BKL (located in the Pearl District) call for three lanes, with a center turn lane.  The change would be rather dramatic, morphing from a “stroad” to a more traditional “main-street” in a context sensitive approach that would help to improve the neighborhood atmosphere, and help create an area to be explored and to travel within.   It would be quite an appropriate design for the way this part of Tulsa will continue to grow and change over the next decade.

New retail development is emerging in the area, and as districts like Cherry Street, Brookside, and the Brady have learned, strong retail relies on heavy foot traffic.  Shop owners like window shoppers.  Potential customers are much more likely to stop in a store and buy something if they are casually walking or biking, than they are if they are driving as quickly as possible down the road unaware of the shopping opportunities right in front of them.

Moreover, Tulsa is beginning to attract more young professionals who want to live in the Pearl District, Kendall-Whittier, Swan Lake, and areas east and west of TU – with the option to bike to downtown rather than drive.  It makes sense to accommodate multiple travel modes and expand the mobility options and choices of how Tulsans will get around town.  INCOG’s GO Plan, an 11-city bike / pedestrian master plan, agree, and illustrates that 4-lane to 3-lane conversions make sense:

“Over the past few years, Tulsa has been implementing infrastructure improvements to make biking and walking easier. One pertinent example is the four-lane to three-lane road diet conversion of 4th Place, between Yale Avenue and Sheridan Avenue. …During that process, engineers recognized that four travel lanes were not needed for present or projected volumes of traffic. 4th Place was a designated on-street bikeway in the 1999 Trails Master Plan, and this road diet afforded the opportunity to upgrade the bike facility from a signed route to bike lanes.”

The design changes are also consistent with Complete Streets, a policy that requires newly funded road improvement projects to provide for and accommodate all modes of travel, including not just autos, but pedestrians, cyclists, and transit users.

Overwhelmingly, young professionals, store owners in the area, drivers and bikers alike, were in favor of Scenario 1 that the city proposed.  This plan puts Route66 on a road diet, creating one lane of traffic in each direction, with a center turn lane down the middle.  20’ of the right-of-way is used for bike lanes in either direction as well, with 2’ of a buffer between the bike and auto traffic.

Senario 2 is also a 3-lane design, but it removes the bike lanes in favor of providing parallel parking on the south side of the street.  While the argument can be made that the area could use more parking in order to plan for more retail shoppers, it was pointed out that there is already quite a bit of off-street parking in front of and behind the buildings.

Remix Route66! We encourage you to be a Civil Engineer for a day.  Well, OK not even a day. Like 15minutes.  Go to http://streetmix.net/chimchim237/8/route66-remix and use StreetMix to REMIX the street!  What do you want to see?  Narrower lanes?  Parking on both sides of the street?  Protected bike lanes? Remix Route66, and then share your ideas on Facebook or twitter using the hashtag #route66remix We will be taking these ideas back to the City of Tulsa Transportation Engineering Services Department and let you know about further public discussions about the design plans for this street.

We can’t wait to see what you come up with!

It is all part of our commitment here at Smart Growth Tulsa to build a true participatory democracy, where citizen engagement is sought, citizen input is valued, and citizen’s voices are heard.

He serves on the board of TulsaNow (http://www.tulsanow.org), a group that advocates for intelligent and efficient land use, planning & zoning, transportation, and economic development policy. He also serves on the board of the Art Directors Club of Tulsa, and Tulsa’s local Code for America chapter (http://codefortulsa.org/). Carlos is certified in Human-Centered Design, and was selected by national urban-affairs magazine NextCity (http://nexcity.org) as part of its 2014 Vanguard Class. He’s passionate about revitalizing neighborhoods, improving public policy, and collaborating with local creative.