LET’S THANK GEORGE KAISER By investing alongside him 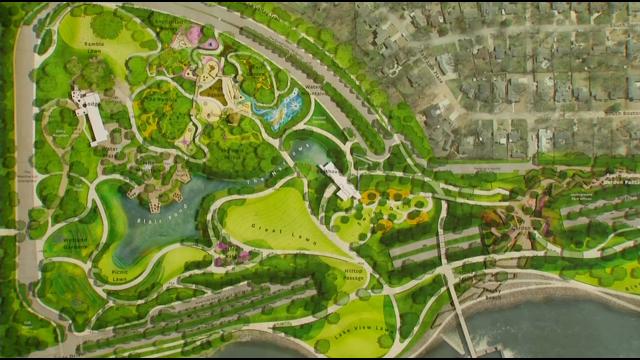 land bridges will seamlessly connect the park to the river bank

The Gathering Place, a $200+ million project paid for primarily by the George Kaiser Family Foundation, should silence critics who have for decades lamented the lack of transformative development along the Arkansas River and River Parks. For fifty years Tulsans have talked the talk about river development but never stepped up to fund it. Now, thanks to the incredible generosity of one very civic minded citizen, we are preparing to walk the walk.

How can our community possibly thank a donor for a gift of this magnitude? It’s simple really; we can thank him by making investments in the infrastructure and improvements needed to support and enhance his visionary contribution to our city and its quality of life.

Let’s face it; the ultimate success of this new world class park will depend upon how well we maximize its potential. It cannot be allowed to be an island all unto itself. We must have water in the river and plenty of it. And suitable access needs to be provided in the form of a vastly improved Riverside Drive and Riverside Parkway which complements rather than detracts from the park itself.

In this column we will focus on Riverside; the thoroughfare and the gateway to both the River Parks and The Gathering Place. When it comes to roadway configurations, pavement conditions, scale and types of neighboring real estate development, Riverside Drive is a tale of two cities.

The section north of 56th Street is characterized by much narrower lanes and center median, deteriorating curbs and pavement conditions, no shoulders, dangerous curves and dips, lower density real estate development and vociferous neighborhood opposition to any radical changes and many who would like to keep it exactly as it is.

While almost no one wants to see Riverside become a high speed freeway there is no question that traffic counts will continue to rise as we see more and more development along the river. The new park will be a huge draw and the trails system will only grow in popularity.

Other major new developments are also planned or underway, including a massive expansion of the River Spirit Casino and a proposed sports complex at Johnson Park. There is also a conceptual plan for the redevelopment of 60 acres of city-owned land at Riverside and 71st Street and of course the still to come Route 66 Interpretive Center at the plaza by Southwest Boulevard and Riverside Drive.

All previous attempts to reimagine Riverside Drive as a major north south arterial have been met with enormous opposition, almost all of which has been generated in the midtown area. Consequently almost nothing has been done to improve the roadway in decades and it shows big-time especially in the 11th Street to I-44 section.

Most of the neighborhood objections are centered on a unified desire to discourage faster speeds down Riverside. On the other hand much of the roadway in the midtown area is not safe and it’s ugly. The challenge is to create improvements that make it safer and more attractive without turning it in a NASCAR track.

Complimenting matters is the so-called “Bartlett Ordinance” which requires that improvement plans be put to voters in a separate proposition from any larger roadway package. After decades of rejected Riverside enhancement packages and sporadic piece meal improvements it is time to compromise.

Priority number one is the stretch between 21st and I-44. About $40 million dollars in public and private improvements are proposed for the section between 24th Street and 33rd Place in conjunction with the development of the park.

That includes a hoped for $14.8 million federal Tiger Grant. If the grant application is approved the city’s share of the overall $40 million dollar cost will be only about $5 million of the $19 million dollar roadwork portion of the project.

If all goes well that section of the roadway will be spectacular by coordinating enhancements already planned by the city with privately funded park specific improvements including a new Crow Creek Bridge. It will be up to the Mayor and City Council to make up the difference if the Tiger Grant application is not approved.

That would require funding through the upcoming capital improvement package currently being debated. The remaining Fix Our Streets money will be used to rehabilitate Riverside south from 33rd Place to 41st Street, as originally planned.

That would leave the dreadful roadway conditions in the section between 41st and the newly improved I-44 interchange unfunded and sticking out like a sore thumb.

If the Mayor and City Council really want to show their appreciation to Mr. Kaiser they should add the $14.8 million to the upcoming CIP to be used for the 24th Street to 33rd Place stretch if we don’t get the grant, and for the righteous rehabilitation of the 41st to I-44 Interchange section if we do get the grant. Take the money from the preposterous proposal to widen streets and add lanes in south Tulsa to avoid increasing the overall size of the package voters will see in November.

This community needs to work together to create an attractive roadway from 11th Street to 101st Street. Historically, road improvement planning and funding focuses on one mile segments at a time which does not typically deliver much continuity to a 9 mile corridor.

What we need is a long term strategic plan that utilizes lighting and landscaping amenities along with context sensitive design standards to tie all of Riverside Drive’s differing elements together. The goal is to create a signature parkway that is safe, seamless and beautiful and worthy of connecting Tulsans to their world class park and trails system.

That would be step one in thanking George Kaiser for his magnanimous gifts to the City of Tulsa. We will talk about step two, putting water in the river in a future column.