CRUNCH TIME FOR IRON GATE Let's talk about it

FOn Friday morning, August 28th, SGT Advisory Board member, Carlos Moreno and I sat down with Connie Cronley, Iron Gate Executive Director and Shane Saunders, Iron Gate board member and capital campaign co-chair, to discuss the recent debate over Iron Gate’s potential move to the Pearl District. Clink the link below for video highlights of our interview.

As chronicled in Iron Gates or Pearly Gates? By Carlos Moreno, the Iron Gate soup kitchen and grocery pantry is proposing a move from downtown to 3rd and Peoria. Predictably, many property and business owners there are upset and opposed to that location. The opposition grew to a crescendo when many of them packed City Council Chambers for a Board of Adjustment meeting Tuesday, September 25th, scheduled to rule on an application for zoning variances and exceptions to allow the project to move forward.

In response to that opposition, the attorney for Iron Gate requested a continuance until 1 P.M. Sept. 8 in the City of Tulsa Council Chambers, 175 E. Second St. Later, Iron Gate Executive Director, Connie Cronley was quoted as saying, “we have been surprised by the volume of opposition to Iron Gate’s relocating to Third and Peoria. This gives us time to invite those who have expressed concerns to meet with us for further discussion.” Iron Gate will be hosting a meeting at the church at 501 S. Cincinnati Ave at 6:00 P.M. Sept. 1 to address concerns regarding the plan. 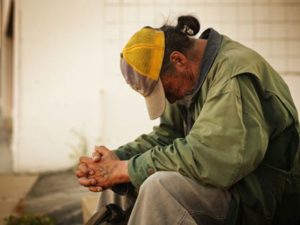 Reportedly there are about 700 chronically homeless in Tulsa. Most congregate in or near downtown to take advantage of social services offered by multiple organizations and agencies.

The Mission of Iron Gate? Feed the Hungary. Begun originally by a Trinity Episcopal Church Men’s Bible Study group who began making and distributing sandwiches in 1978, they evolved as a Trust in 1985, began serving meals 365 days a year in 1987, and established as a 501(c) (3) not for profit organization in 1997. In 2011 Iron Gate ceased being a supporting organization under the church, and officially became a stand alone 501 c-3 organization.

They have operated since their beginning in very cramped quarters spread out over 3,000 discontinuous feet in the basement of the church at 501 S. Cincinnati Ave in downtown Tulsa.   A dining area with a 127 seat capacity results in a long line often standing outside in the elements waiting to be seated. One goal of the new facility is to “end the breadline in Tulsa.”

The Soup Kitchen is open daily, year around, from 8:00 to 10:30 AM and feeds on average 500 to 600 hot meals a day. Approximately 46% of the soup kitchen guests live on the street, in their cars or are couch surfing while 33% have some sort of housing and approximately 21% stay in shelters.

The Food Pantry distributes grocery bags from 11:00 AM to 1:00 PM on Tuesdays and Thursdays to approximately 315 families every week, well over 1,000 bags per month in addition to 1,200 Kid’s Packs a month. About 75% of the grocery panty guests are working poor. Most, including families with children have housing. 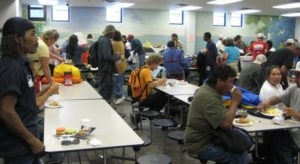 Iron Gate has been serving significantly increased numbers of guests since the beginning of the great recession. Tulsa has had a three-year decline in its number of chronically homeless, according to the Tulsa City-County Continuum of Care Point-in-Time Survey completed in 2015. Iron Gate in particular has seen a modest transition of their soup kitchen guests to those now utilizing the food pantry and preparing their own meals.

Never-the-less, Iron Gate is out of space with no room to grow or add additional services. A new facility would allow for additional programming opportunities like a learning kitchen to teach healthy meal preparation and how to make the most of the monthly grocery allotment. Nearly half of the food served by Iron Gate is purchased from the Community Food Bank of Eastern Oklahoma at deeply discounted prices. The rest is purchased from other sources but limited storage and refrigeration space makes it nearly impossible to take advantage of other volume purchasing opportunities.

The Path to a Solution 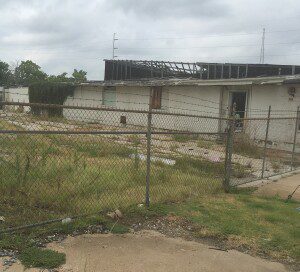 Because of the cramped conditions a move has been talked about for two to three years. Over the last 18 months, 27 sites have been considered and offers have been made on three. The criteria check list included being near a bus route, close to the population they serve, and space for a single story 16,000 square foot building with ample room for on-site parking.

Their first choice was an old bow truss warehouse style building near 11th and Detroit that met virtually every specification on their check list. It was large enough, inside the IDL, near the bus line and excited the architectural firm with its renovation potential. An offer was made and an agreement nearly reached but in the end the seller decided against selling the property for personal reasons.

In April of this year, Iron Gate settled on the 3rd and Peoria location as the best available and meeting most of the desired attributes on their checklist. Selser Schaefer Architects was retained and asked to design a building that would replace the burned out shell of the former lumber company and fit seamlessly into the neighborhood.

As has been previously reported, many in the Pearl District cried foul when they were only notified of the Board of Adjustment hearing five days before it was scheduled, but they very quickly organized to oppose the project. They were also disappointed that Iron Gate representatives seemed uninformed about Tulsa’s Comprehensive Plan and the 6th Street Infill Plan which has guided development in the area for years. 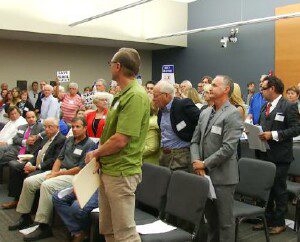 As President, speaking on behalf of the Pearl District Association, Leanne Benton was quoted in this August 26thTulsa World Article

“Our very livelihood and future income is at stake here along with many others in this room who have taken a risk to invest in the Pearl District. We don’t think this property is right (for Iron Gate). We have very good legal standing on that, and we don’t think that’s going to change.”

Benton said she would like to see the agency’s zoning request dropped and for further discussions to focus on other possibilities for Iron Gate to expand its efforts.

“We believe there is a better way and a more strategic solution than this,” she said. “The Downtown Area Master Plan has a very specific location to group social service and justice locations so they can support each other and serve their clientele efficiently and effectively.”

While Iron Gate did consider a site near the Day Center for the Homeless, Shane Saunders suggested that the demand by some that Iron Gate locate in the northwest quadrant among a host of other social service organizations would effectively segregate the poor, the hungry and the homeless from the rest of the community. That sentiment was echoed by Johanna Burton in a Tulsa World Letter to the Editor:

“Most of those speaking against the move applaud helping the poor, just not in their “vibrant urban core” — not realizing a class-segregated downtown is not vibrant or urban, or the core of anything.

Tulsa and downtown are changing fast. Many people travel by bus and SUV, on foot, bike, and skateboard to get there. They carry bedrolls and iPads, sketchbooks and mop buckets, from shelters and offices to food trucks and food pantries. That’s what makes Tulsa a city, and makes us citizens.

In a better Tulsa, working people would be able to afford groceries, veterans would live in houses, and we would all be stronger for it.

Ignoring the need won’t get us there. Feeding each other will.”

Saunders expressed a desire to challenge those with the mindset that Iron Gate is going to be a problem by asking them to realize in reality they are part of the solution. They are the ones who are feeding the hungry, the homeless and the poor, providing a safety net to help keep people well fed and in their homes. “Nothing will make you act sub-human quicker than being hungry. Nothing will turn a panhandler into a pickpocket quicker than being hungry and we are trying to make sure that doesn’t happen.”

Saunders also expressed regret that the organization was not more familiar with the Pearl District Association or the existing development plans.

“My bad,” he said, as spokesperson, I should have been more familiar with it, but I have now read the entire 83 page 6th Street Infill Plan.

While the plan is about 10 years old he said he thought it made a convincing case statement justifying the repurposing of an almost unusable piece of property and building a well designed (structure) that is consistent with what the neighborhood looks like.

Both sides expressed some frustration that they are being vilified by some of the comments made in various media reports, blog posts and comments. Cronley suggested that while some Pearl business owners are articulate in making the case for their concerns, it is actually Iron Gate who is speaking up many of the residents of the area. According to their records there are 380 registered Iron Gate guests who actually live in the Pearl District, which accounts for 25% of the total 1,520 who reside there.

Saunders expanded on that, pointing out that Iron Gate serves an additional 522 registered guests who live in the Kendall Whittier neighborhood, just east of the Pearl District.

In a podcast interview with Kevin Canfield for The Frontier, Benton countered claims by some of nimbyism by pointing out the Pearl District was already home to multiple social service agencies including Indian Healthcare, Family and Children’s Services and Tulsa Youth Services. She suggested others should welcome social services organizations in their own neighborhoods before passing judgement on those in the Pearl District opposing one more in theirs. 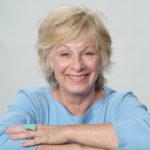 Smart Growth Tulsa is not taking an official position on this matter and has not polled our Advisory Board Members. We support the Pearl District Association, an affiliate member as well as the mission and ministry of Iron Gate. We encourage a respectful, open-minded dialogue between the parties that includes a willingness to compromise as they work towards an amicable solution and await a decision by the Board of Adjustment.

Near the end of our interview, Cronley summed it up this way. Paraphrasing, ‘this process has been a blessing because it has brought to the public a discussion of the real problems of homelessness, and hunger and poverty in our community.’