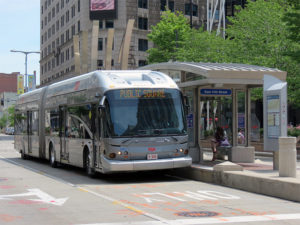 In the next few months, Tulsa’s elected officials face challenging funding decisions which will have a vital and profound impact on the future of transit in Tulsa. The more telling outcome of these decisions will determine the Mayor’s and the Council’s commitment to implementing the vision and goals of our comprehensive plan, adopted in July of 2010.

For the last 6 to 12 months, city department heads have been busy trying to whittle down approximately $1.4 Billion in pressing needs to match up with around $800 million in projected revenue. An extension of the 3rd penny sales tax and Fix Our Streets initiatives will likely be set for a vote this fall. The competition for funding will be fierce and tough choices will have to be made.

With the enormity of the needs and the limits of the resources, the resulting turbulent decision making processes will boil down to an ideological struggle between those who favor business as usual and those who recognize the need for progressive changes in our spending priorities.

Too often over the past three years, our spending practices have not been consistent with our long term strategic business plan which is regrettable to say the least. With this in mind, it’s hard not to recall the biblical admonishment found in both the Books of Luke and Matthew, ‘for where your treasure is, there your heart will be also.’

A good illustration of this philosophical conflict pits those who champion widening streets and intersections, adding lane miles to an already over-burdened infrastructure maintenance budget, versus those who favor transit improvements as a more sensible and sustainable investment providing transportation choices and a better return.

During the upcoming debate, the City Council and Mayor will be asked to consider $15 million to $17 million in capital improvement spending to fund Bus Rapid Transit service along the Peoria corridor from 36th Street north to 81st and south Lewis. The proposal comes after an exhaustive planning study by INCOG, Tulsa’s regional transportation planning agency.

Bus rapid transit (BRT) is a term applied to a variety of public transportation systems using buses to provide faster, more efficient service than an ordinary bus line. The goal of these systems is to approach the service quality of rail transit while still enjoying the cost savings and flexibility of bus transit.

The concept is not a new one. The first BRT system in the world was the “Integrated Transportation Network”, implemented in Curitiba, Brazil in 1974. However, most of the global growth of these systems has taken place since the year 2000 when Bogota, Colombia, a city of more than 8 million people revolutionized their transportation network by implementing the Curitiba model.

Bus rapid transit inherits some of its name from rail rapid transit, which typically describes a high-capacity urban public-transit system with its own right-of-way, multiple-car trains with short headways, and longer stop spacing than traditional streetcars and buses.

The range of options offered by various BRT systems around the globe is endless. They include an extensive range of different service levels which use buses on a wide variety of rights-of-way, including mixed traffic, dedicated lanes on surface streets, and bus ways completely separated from traffic.

According to Wikipedia, the free encyclopedia, an ideal bus rapid transit service would be expected to include many if not most of the following features:

Bus only, grade-separated (or at-grade exclusive) right-of-way: dedicated bus lanes allow buses to operate without interference from other modes of traffic.

Serve a diverse market with high-frequency all day service: serve both transit dependent and choice riders by moving large numbers of people between locations quickly and reliably.

Bus priority: Preferential treatment of buses at signalized intersections: allowing buses to proceed sooner, out of turn, relative to the normal sequence of signal phases.

A specific image with a brand name: The system’s brand identity contributes to its attractiveness as an alternative to driving cars.

Off-bus fare collection: Conventional on-board fare collection slows the boarding process. Some BRT systems collect fares upon entering an enclosed bus station or shelter which allows passengers to board quickly through all doors of a stopped bus.

The list goes on to include level boarding, enclosed transit stations and other amenities. What is being proposed for Tulsa might be considered by some as BRT Lite, an affordable hybrid offering 15 minute frequencies that will transform our auto centric community mindset to appreciate the long term benefits of an improved and expanded transit system.

The importance of an improved transit system in conjunction with innovative new land use policies is well documented throughout Tulsa’s comprehensive plan. So far we have only paid lip service to that plan and now it is time to put our money where our mouth is.

The Peoria BRT is a logical first step in building a balanced and sustainable transportation network for Tulsa’s future that will ultimately include street cars, light rail and commuter rail.

Masterminded by INCOG’s Senior Transportation Planners working in concert with the experts at Jacobs Engineering, the plan utilized a rigorous Alternatives Analysis to determine the final product. It is entirely consistent with the comp plan and needs only about $15 to $17 million of the projected $800 million funding package to become a reality.

On the flip side, we have some citizens and city staffers who appear frozen in time with a death grip on the past. Many of them are proposing up to $140 million in road widening’s including $30 million for a single one mile stretch of Yale Avenue from 81st to 91st.

Pardon me, but this impetuosity calls to mind the timeless quote “The height of insanity is continuing to do the same thing and expecting a different result.” It has been demonstrated beyond any doubt that we cannot afford to maintain our existing infrastructure so why would we even think about adding more? It’s madness.

There will be a lot of pressure on our elected officials from powerful forces that refuse to embrace change. This is a battleground and our future prosperity is at risk. Let’s encourage our City Councilors to begin making meaningful investments in our comprehensive plan and support the Peoria BRT because we know the Mayor won’t be leading the charge.