HELMERICH PARK IS ON THE ROPES, AGAIN! But not yet down for the count 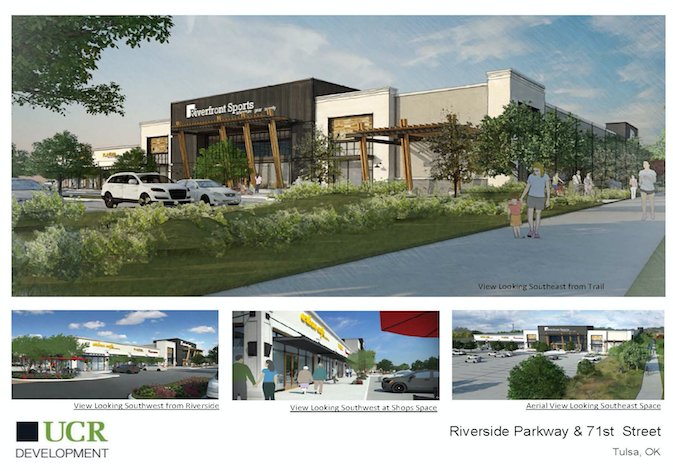 A Special Meeting of the Tulsa City Council has been scheduled for this Tuesday, February 21, 2017 to consider a proposal to abandon a portion of Helmerich Park, PAVING the way for a long disputed commercial development to proceed.  This may be one of the last opportunities for citizens to speak up on behalf of those who question the wisdom of the sale which has been contested in court since August 11, 2015.

The meeting is scheduled for 10 a.m. in the Council Chambers at City Hall, in One Technology Center at Second Street and Cincinnati Avenue.

Whether you support or oppose this effort to abandon the park land, we encourage you to express your views by attending the meeting and signing up to speak, or emailing both Mayor Bynum, and your City Councilor.

If you are uncertain of your council district, check here:  http://maps.cityoftulsa.org/citycouncil/

What is behind this action?

It’s not difficult to speculate on what’s behind the February 21st, 2017 Special City Council Meeting to consider a mayoral sponsored resolution regarding the future of a portion of Helmerich Park.  Quite simply, it is damage control, and an attempt to clean up the mess  left behind by the previous administration.

Mayor Bynum walked into a hornet’s nest when he inherited the responsibility to defend the City of Tulsa in a lawsuit originally filed on August 11th, 2015.  That is also the day the Tulsa Public Facilities Authority voted 3-2, after they had received notice of the lawsuit, to enter into an agreement to sell 8.8 acres of Helmerich Park  to UCR Development of Dallas for $1.465 million.

The original motion filed by Craig Immel, sought to delay the TPFA vote to give Tulsans more time to examine the proposal.  That issue was never resolved by the courts and in December of 2015, the TPFA filed a Petition for Declaratory Judgement naming Immel as a defendant and seeking a court ruling that would allow the TPFA to proceed with the sale. Immel, joined by four other Tulsans, responded on January 7th, 2016 with an amended petition further outlining their position and maintaining that the development should not be allowed to proceed.

The seesaw legal battle has continued over the past year, including a court-ordered mediation which took place in January without any apparent progress.  In the meantime, the sale has been in limbo with the developers having received numerous contract extensions pending the outcome of the legal process, which could conceivably take years to adjudicate. The next scheduled court date is not until late June.

So it is not surprising that the new mayoral administration and the city council seek to head off a protracted legal fight by taking actions to circumvent same. Unfortunately, based upon the information released so far, the proposed strategy seems unlikely, in my view, to result in a solution.

Helmerich Park was created in 1991 after the city and private donors paid $2.25 million each to purchase the property for creation of a park. The funds were transferred to the TPFA, which purchased the land and is the title holder of record, holding it in trust for the city as beneficiary.  The city’s portion was funded by 1985 sales tax revenue dedicated for park purposes, and the plaintiffs maintain among many other things that using the land for any other use would be a misappropriation of taxpayer funds.

The lawsuit further contends that assurances were given to the Council at the time that the TPFA could not sell or transfer the property without the consent of the Council.

This is the perceived basis for council consideration of a mayoral resolution to abandon the property and declare it as surplus, presumably clearing a major hurdle that has prevented the sale of the land from closing. If only it were that simple.

There are procedures for determining if and when a property is deemed to be “abandoned.” State law requires that the city provide a factual record supporting that claim. It’s difficult to imagine how making a declaration will counter the fact that the land in question has been continuously maintained by the Tulsa Park Department and in use by citizens for over 25 years.

While the “surplus” designation is a key legal position of the plaintiffs, it is only one of a dozen or more substantive points of contention that would remain unresolved, even if the council were to agree to abandon the property and declare it surplus.  Former Mayor, Terry Young, spokesperson for the plaintiffs has stated publicly in no uncertain terms that the proposed actions would do nothing to deter the group’s lawsuit.

Mayor Bynum was quoted in this February 17, Tulsa World article “What I don’t want is for this to be decided in a courtroom where the elected representatives of the citizens don’t have any say in the outcome of the property.”

I would respond by pointing out that it was a duly elected official who got us in this mess in the first place, and at this point the interests of the citizens of Tulsa are best served by allowing the Tulsa District Court to rule on the legality of the transaction in question.  That is something neither the city nor the developers seem eager to do and for good reason.  They will likely lose.

When it comes to serving the public interest it was Craig Immel who stuck his neck out and challenged the TPFA and the previous administration.  He sought to make sure that the promise that those 1985 sales tax dollars would be dedicated exclusively for park use were indeed honored.  We all owe him a debt of gratitude.

While Mayor Bynum has publicly suggested that his proposal will seek some concessions from both sides, you cannot make a silk purse out of a sow’s ear.  For a man who ran on a platform pledge to renew a spirit of high standards and expectations this capitulation will be seen by many as a huge disappointment, likely leading to an early exit from what has been till now a euphoric honeymoon period.

It may seem an expedient measure to lower the bar and accept this dreadfully ill-conceived use of a highly valued public open space for a 500 plus car parking lot and a couple of cookie cutter buildings with the promise to get it right next time.  We must do better if we are committed to the kind of place-making strategies that will make Tulsa a destination worthy of attention.

Fear may well be a motivating factor here.  Fear that Tulsa will get a reputation as being unfriendly to development interests.  And fear the city may be sued by the developers if the deal craters.  I don’t buy either notion, not for a minute.

The future of retail looks bleak for big-box stores

Since all of this began, Tulsa has opened a new Costco Store, the first in Oklahoma, and a new Trader Joe’s.  We’ve seen multiple new openings in Tulsa Hills and soon we will be home to a new Cost Plus World Market on a long vacant site on I-44.  Personally, I could not care less about rolling out the red carpet for developers who are not respectful of the high development standards that Tulsan’s say they expect and deserve.

Remember, brick and mortar retail is in decline nationwide; especially big-box and junior-box stores as evidenced by the recently announced closing of local Sears and Macys Stores. The increasing market share of internet sales and the preference for smaller, locally owned retailers with a knack for service is a trend unlikely to be reversed. We should never sell the parcel at 71st and Riverside.  And if we decide that development is appropriate there, let’s insist that it be on a ground-lease with the highest quality construction materials that will serve Tulsa families for generations, not give it away for a quick 10 to 15-year fix. 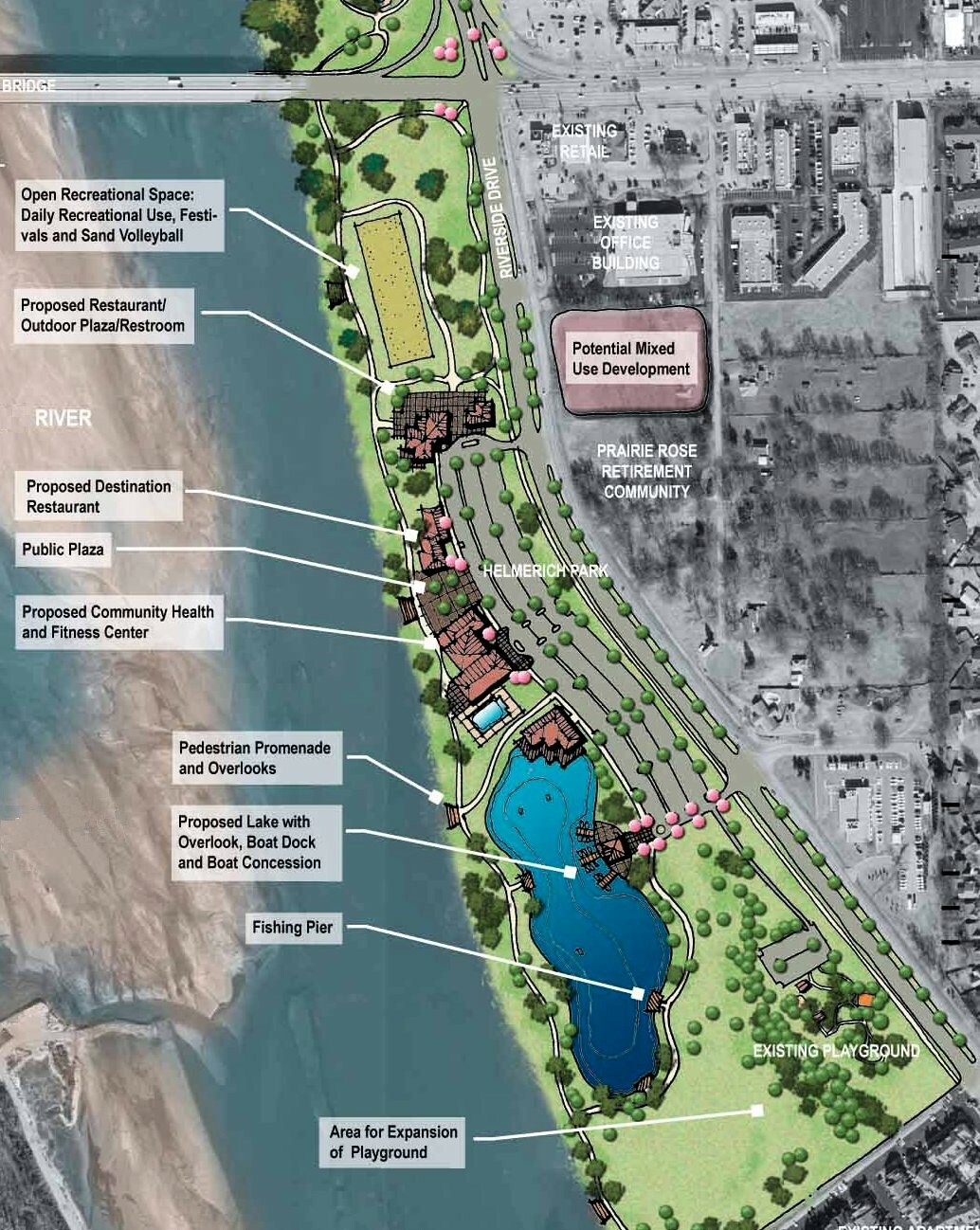 An illustration in the Arkansas River Corridor Master Plan comes much closer to how the Plaintiffs would like to see the property developed.

Quite honestly, I have little sympathy for UCR Development of Dallas.  My sources tell me that they have been intractable throughout; unwilling to make any major concessions to make the deal work.  They are currently operating under a 60-day extension to the agreement that will expire in early March.  In a Kevin Canfield article published in The Frontier on February 13th, Councilor David Patrick is quoted as follows “My understanding is the developer is getting antsy and wants to know one way or another, or if he’s got to move down the road.”

In contrast, recognizing that many Tulsans would like to have an REI store, and that the City of Tulsa would like to increase the sales tax base, the Plaintiffs have repeatedly offered a win-win compromise in informal negotiations.  Plaintiffs have offered to agree to a long-term ground lease agreement upon which the developers could build an approximately 20,000 square foot REI flagship store with coffee shop (similar in quality to Denver’s REI) and a restaurant (similar in size and form to Tulsa’s Blue Rose Café) to enhance Tulsans’ River Parks experience. The Developers reportedly rejected the proposal outright.

I very much doubt UCR would file a suit against the City of Tulsa, as it could adversely impact their own reputation and make other communities gun-shy for fear they might wind up on the business end of a lawsuit if things don’t go the developer’s way.  I also doubt REI would support such an action.

I encourage the City Council not to abandon the subject property nor to declare it surplus.  I also plead with Mayor Bynum to suggest the TPFA allow the present contract extension to expire without renewing it.  UCR can then “move down the road” and the City of Tulsa can begin to re-imagine the future of the land after hosting multiple workshops and town hall meetings designed to take the pulse of those they serve in a true participatory democracy.  Anything less will be viewed by many as a major setback for a mayor who up until now has inspired new hope for higher development standards for our city.

If you are concerned about the future of Helmerich Park, email the mayor and your city councilor and or plan to attend the Tulsa City Council Special Meeting scheduled in the Council Chambers at City Hall, One Technology Center, at 10 a.m., Tuesday, February 21st, 2017.

Here are some links to related articles published on Smart Growth Tulsa’s BLOG:

THE RISE AND FALL OF HELMERICH PARK – PART III

THE RISE AND FALL OF HELMERICH PARK – PART II

THE RISE AND FALL OF HELMERICH PARK – PART I