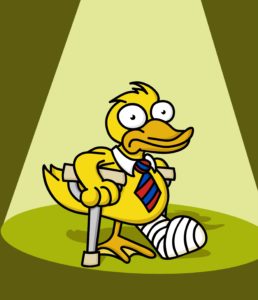 None other than the inimitable Bill Clinton once said, “You know, it’s just one small step from legacy to lame duck.” In Dewey Bartlett’s case, it has been the three years of small and timid steps he has taken while sleepwalking through his term which have led to his all but assured demise as Mayor of Tulsa.

About the best thing you can say about Mayor Bartlett’s time in office is that he didn’t do anything downright stupid. However, he also didn’t offer any creative or visionary thinking or policy initiatives for Tulsa’s future which is kind of stupid in itself, considering the extraordinary, full four year opportunity he has had to do so, which his predecessor and successor did not and will not respectively enjoy. Unfortunately, while the Mayor has been marking time, Tulsa has fallen further and further behind competing cities with more progressive policies and imaginative leadership.

Now, with a scant few months left before the election, about the best Bartlett can hope for is to manage his departure with grace and what little dignity he has left. I suspect he won’t dare challenge former Mayor Kathy Taylor as she will almost certainly embarrass if not downright humiliate him at the polls. And, with former Councilor Christiansen having already been on the campaign trail for months, Bartlett could easily be relegated to third place, or even worse if any other serious candidates come forward, like me for instance. Mercifully, there is finally light at the end of the tunnel. It may seem like it has been an eternity but our leadership vacuum is finally on its last legs.

A second term run by Bartlett probably boils down to whether or not the Mayor can dream up a plausible face saving exit strategy, something along the line of devoting more time to his family and business interests. On the other side, there are persistent rumors that he may be seriously tempted to enter the race solely to raise enough money to pay off debts from his last campaign.

In any event, if Dewey Bartlett decides to run for a second term, we will undoubtedly be treated to the most negative political campaign in Tulsa’s history. Remember his unrelenting dirty advertising tricks against Tom Adelson, much of which was deployed even when Bartlett enjoyed a sizeable lead in the polls? The thought here is it will pale in comparison to what Bartlett will resort to this time around as a desperate underdog. The only question is who will be on the receiving end of his wrath and negative campaign strategy, Kathy Taylor, Bill Christiansen, someone else, or all of the above?

One of candidate Bartlett’s favorite campaign ploys last time was to try and paint his opponent as an Obama clone who would lead us to ruin, in spite of the fact that municipal elections have very little if not nothing to do with national politics. It was all part of the Bartlett’s strategy to divert attention away from his deceit and deception by feigning interest in the new comprehensive plan to win the support of its proponents while subsequently doing everything in his power to diminish its relevance.

Look for him to do the same if he runs again. Even though this will be a non-partisan election, Bartlett will try to tie Kathy Taylor or any other democrat to Obama because the President’s opponents far outnumber his supporters in these parts. What else can he possibly do to distract attention from his dismal and lackluster record?

Speaking of records, let’s take a look at the Mayor’s accomplishments so far. Quick, name a couple, okay one, name just one. No really, what are some of the defining moments of his first three years? Thinking, thinking, thinking, and still thinking.

Well, the Mayor will probably pat himself on the back for not going over the fiscal cliff during the recession, but how can he? Part of his ability to survive was by accepting federal police grants from the evil (his perception, not mine) Obama Administration which he mismanaged by playing Russian roulette with the police unions, unjustly costing the city hundreds of thousands of precious dollars.

The fact is the City of Tulsa has some very talented people in the finance department and the Mayor avoided financial disaster by wisely taking their advice, isn’t that what he is supposed to do? Don’t forget, the city is required to have a balanced budget, and the City Council helps insure that. Because Bartlett did not jump off the fiscal cliff is hardly reason enough for him to beat his chest and boast of his inspired financial governance.

So what about the Mayors economic development strategy, what are some of the highlights? Well, let’s see, he concocted the idea for a multimillion dollar slush fund to attract bottom feeding businesses seeking to sell their souls to the highest bidder. The closing fund economic development theory was recently debunked by the way with Verizon’s announcement of 500 new jobs in Tulsa apparently without any pubic incentives whatsoever.

Oh yes, he then determined we should offer a bankrupt airline a couple hundred million dollars for facility improvements without any guarantees of a return. Fortunately both of those ideas were crushingly defeated by voters in the Vision 2 Proposal. And finally, the Mayor’s grand Intermodal Facility plans went up in smoke, at least temporarily when he could not even successfully negotiate a simple land swap with a ready, willing, able and friendly property owner.

What about transportation, you ask. What has the Mayor accomplished in realizing the ambitious transportation strategies of our new comprehensive plan? The simple answer is, nothing, nil, zippo, zilch, zero, naught. The sum total of Bartlett’s unimaginative transportation policy includes only his incessant commitment to completing the Gilcrease Expressway which comes from nowhere and leads to no place. This insipid, ill-timed, and ill-conceived plan, by all accounts will take 25 years to complete at a cost of $250 to $300 million dollars. Meanwhile, new money for an expanded transit system, multimodal living streets and more sustainable transportation options has been almost non-existent.

But wait, there’s more, as late night television’s kitchen gadget marketing genius, Ron Popeil always says. The Mayor’s record of underachievement is incontestable and the list of his missed opportunities is growing like an Oklahoma wildfire. Meanwhile we can only hope that Mayor Bartlett will take his licks, bow out gracefully and save us all from an ugly and endless negative campaign that will almost certainly test our tolerance for vitriolic campaign rhetoric.