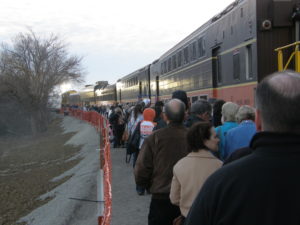 the demonstration trips sold out quickly

The Oklahoma Department of Transportation is poised to sell state-owned railroad tracks linking Sapulpa and Oklahoma City. A sale likely would deliver a lethal blow to prospects for restoring passenger rail between Oklahoma’s two largest cities.

The state acquired the 97.5 mile Sooner Sub line in 1998 from the newly merged BNSF Railway. The massive conglomerate found little use for the route that previously had been a mainline of the Frisco Railroad. Over the years, the track had been neglected to the point that traffic was limited to 10 mph and it was in danger of being abandoned. Fortunately, farsighted state officials stepped in and saved the day by purchasing this prized asset.

Immediately after the purchase, the state leased the line to the newly created Stillwater Central Railroad, which was required by contract to rehabilitate the line.

Sixteen years later the Stillwater Central has done an exemplary job of adding value to the line and all of the communities along it. According to reports, the company has paid the state of Oklahoma more than $1.1 million in lease revenue the past two years. Its business model also resulted in the creation of thriving new small businesses that have produced jobs in communities such as Luther, Chandler, Stroud, Bristow and Sapulpa.

This success story has not gone unnoticed by the Warren Buffett-owned BNSF, which now wants to buy back what it earlier was prepared to abandon. It was at that company’s urging that ODOT decided to explore the sale of the rail line, which eventually resulted in the recent request for proposals.

The BNSF interest is probably piqued by a massive new market for transporting thousands of carloads of Bakken field oil from North Dakota to Stroud, where tank cars are emptied into a pipeline for Cushing oil storage facilities. While a sizable profit on the sale is not to be ignored, who is to say that abandonment might once again fit its business plan if market conditions change, leaving the state financially unable to repurchase it at a crucial time.

The other remaining bidder, Watco, ought to be competitive and might be more likely to deliver passenger service, but there are apparently no guarantees if a sale is consummated. 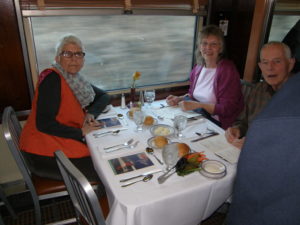 The fact is that the state of Oklahoma has a clear mandate to establish regular and continuing passenger service between Oklahoma City and Tulsa. This was one of the primary motivations for the purchase of the Sooner Sub in the first place.

We Oklahomans own this track and therefore we are in a position to insist that it be made available for passenger rail and the benefit of new and existing businesses rather than being exclusively used for cross-country freight transport. If we are ever going to develop a balanced multimodal transportation system for the 21st century, we need to draw a line in the sand.

That is why a growing chorus of statewide individuals and communities are banding together to oppose this sale. City Councils of Oklahoma City, Sapulpa and Norman have joined Tulsa and Bristow in passing resolutions opposing the sale. All the votes were unanimous.

Please, let your voice be heard. Demand that ODOT quit ignoring open record requests for details and public comments on the bidding process. And call or write Gov. Mary Fallin and encourage her not to sell our railroad tracks.