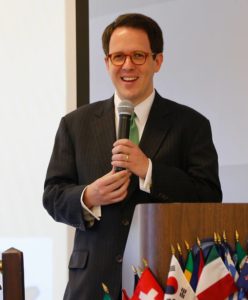 I read with interest the recent announcement that G.T. Bynum was accepted into a two-year national program intriguingly called the Local Moneyball for Government Fellowship Program.

The program aims to bring “moneyball” to local government as part of a trend to base policy decisions on data-driven, track-able goals, reduce wasteful spending  and operate cities more efficiently and effectively” are admirable. It is based upon the concept of Sabermetrics, a term for the empirical analysis of baseball, especially baseball statistics that measure in-game activity. It is derived from the acronym SABR, which stands for the Society for American Baseball Research.

I applaud Councilor Bynum for being the only city councilor chosen for this prestigious honor from 11 cities across the country who will be participating.  I also agree with his assessment that we “are too focused on what we’re spending rather than on the outcomes of that spending,” and we need to be “more strategic and goal-oriented.”

While focusing on data does allow policymakers to make better informed decisions than those the Councilor has characterized as “from your gut” the true measure of sound public spending, both capital and operations should first be their alignment with the community’s adopted comprehensive plan.

A well-conceived comprehensive plan (we have one) provides a starting point for the systematic evaluation of a broad range of public spending.   They help municipalities make choices about which projects should be built and how services should be prioritized.

All too often however, as was the case in the Tulsa World’s interview with Councilor Bynum for the moneyball program’s announcement, our comprehensive plan was absent from the discussion.  It’s emblematic of a culture prevalent among too many of our elected officials who view the local comprehensive plan as suggestive rather than prescriptive and seldom mention it publicly.  Technically, they are within their rights to do, of course.

The Comprehensive Plan does not compel action (e.g. specific expenditures), it acts as a conceptual and procedural guide to discourage actions that would be in conflict with it.  See, e.g. –

“From and after the adoption of the master plan or portion thereof and its proper certification, then and henceforth no improvement of a type embraced within the recommendations of the master plan shall be constructed or authorized without first submitting the proposed plans thereof to the commission (planning commission) and receiving the written approval and recommendation of said commission; provided, however, that this requirement shall be deemed to be waived if the commission fails to make its report and recommendations within forty-five (45) days after the receipt of the proposed plans, and provided further that the disapproval or recommendations of the commission may be overruled by a two-thirds (2/3) vote, properly recorded, of any regularly constituted governmental legislative body, board, or officials sponsoring or acting upon the proposed improvements, after the reasons for such overruling are spread upon its minutes.”  19 Okla. Stat. § 863.8.

“As a general proposition, a comprehensive plan is considered a guide and is advisory in nature, and not the equivalent of a zoning law.” Holtzen v. Tulsa County Bd. of Adjustment ¶21 (OK Ct. Civ. App. 2004).

So, there is nothing specifically that dictates that the City is required to allocate funds based on the comprehensive plan. The Charter requires the submission of a budget and 5-year capital improvement plan on or before May 1st. The municipal budget act dictates budget structure for types of expenditures and that cities must adopt balanced budgets.

Additionally, state law requires that any proposed capital improvement projects must be in conformance with a city’s comprehensive plan, but it does not specify how projects are budgeted. The municipal bond proceeds act specifies how cities can spend bond proceeds.

With all of that said, let us never forget that PlaniTulsa utilized an exhaustive public engagement and planning process led by professionals who conducted workshops and public meetings over a period of months and years. The data which came from that process was then used to help formulate our comprehensive plan. Why is it that our elected officials almost never mention it?

I acknowledge Councilor Bynum for his leadership in helping craft the highly successfully Improve Our Tulsa capital plan last year.  Through a well-organized public outreach the council arguably produced the most transparent and fully vetted capital improvement tax package in history.

In future tax packages however, including the upcoming Vision 2025 extension there will be things we can do to improve on the process and make it even more accountable.  Let’s begin by elevating the comprehensive plan to its rightful place at the head of the table.  By supporting the stated goals and objectives of a strategic master plan the community can avoid spending millions that are detached procedurally, politically, and practically from our adopted public policy.

Tulsa area communities may soon have another chance to “put water in the river” but at the moment the drive to get it on the ballot next spring sounds more like a $300 million “gut instinct” investment decision that Councilor Bynum has suggested we avoid.

Every jurisdiction needs policies in place that require public spending to be directly and inseparably related to their adopted comprehensive plan.  The process leading to new tax package proposals should begin by providing the public with a broad overview of potential CIP projects that support the plan, both funded and unfunded.   Only then can voters fully comprehend the big picture and the universe of needs competing for very limited funds in the face of $ Billions on our wish list.

Rather than dismiss the prospect of investments in the expanded transit system envisioned by PlaniTulsa because “they don’t poll well”, as has been suggested to me by Councilor Bynum, how about providing the electorate the benefit of some options?  Compare data driven sustainable return on investment prospects both quantitatively and qualitatively of river improvements side by side with similar transit investments and let the results speak for themselves.

Anything less than that could be portrayed as an attempt by our elected officials to “spoon feed” the public their pet projects; thereby diminishing the value of our popularly conceived and publicly adopted comprehensive plan.

Once again, I salute Councilor Bynum for being chosen for the moneyball program. Over the past few years his work on the Council has helped him earn a deserving leadership role.

In the four years since the adoption of our comprehensive plan many who participated have felt a real sense of frustration at the pace of its implementation.  Councilor Bynum is in a unique position to acknowledge their hard work and restore their confidence.  He can begin by mentioning it at every opportunity, especially when the discussion includes public spending.

VOTE NO ON STATE QUESTION 777! It's a dangerous constitutional amendment that is not needed
August 31, 2016
Join Here and Subscribe to Our Newsletter
Search
Recent Posts
Categories
Archives
Go to Top