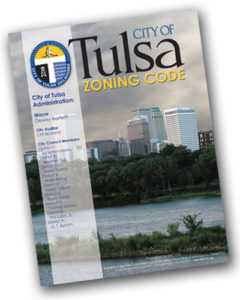 Consideration of the Pearl District’s form-based-code and its expanded regulating plan continues ad infinitum. Or does it? After several years of public meetings, planning commission work sessions, countless staff revisions and seemingly endless public hearings, it appears the Tulsa Metropolitan Area Planning Commission has kicked the can down a dead end street.

There simply may be no place to go from here. Unless there is a serious turnabout by the planning commission, this plan will wind up like so many others in this town, unimplemented on a shelf in the back room somewhere. If that happens, there will be no winners and losers, only losers.

At this point, it is unknown exactly what will happen with the plan, but one thing is clear. The hostility towards this plan is just the tip of the iceberg and is symptomatic of a much larger and more ominous problem lurking beneath the surface.

It is not overly dramatic to characterize most zoning battles of importance as Titanic struggles between commercial and business interests and neighborhood advocates. The fact is there is no level playing field and the iceberg always wins. Why is this, you ask? Because the weight given to the voices of those commercial and business interests is disproportionate to their actual value if the big picture is actually considered.

Let’s review. For the past ten years a group of engaged citizens have been working to revitalize the Pearl District, a long neglected area near downtown roughly bounded on the north by I-244, on the south by 11th Street, on the West by the IDL, and on the east by Utica Avenue.

The fact is the conventional, suburban style zoning code that exists in the Pearl District today is not suitable for the revitalization of an inner-city neighborhood. In most cases the existing code supports a development standard that is not easily achieved using the present building blocks (streets, blocks, lots, and form) of the neighborhood.

The high parking requirements, setbacks, and other rules designed to limit density and use are much better suited for suburban environments where land is plentiful.

For eight years it was clear sailing for the Pearl District Association and its neighborhood advocates. They worked with engineers and staffers at INCOG and the city planning department in a well-organized and highly publicized collaborative process to develop the 6th Street Infill Plan.

It is important to note that all of this progress came with little or no opposition. After all, small area plans are really just policy guides. Actual plan implementation comes only through changes in the zoning code which provide the tools for plan execution. That is why the 6th Street Infill Plan outlines the need for zoning changes by way of a form based code to achieve the plan’s vision and goals.

Since neither the City of Tulsa Planning Department nor INCOG had the necessary expertise to write a form based code, TIF District funds were identified to hire a consultant to help out. For planning purposes, the TIF funds were restricted to a small area but the thought was always to expand it to the entire Pearl District which represents less than 1% of Tulsa’s total land area. This is a well-documented fact.

It was not until the plan was basically finished that opposition began to mount. Once the planning commission sent notices and scheduled public hearings, things started to heat up. Over the last 6 to 12 months, those opposed to expansion of the FBC, made up almost entirely of business interests, have organized a formidable force to be reckoned with.

The disparate influence of this group clearly illustrates a problem that has stifled the dreams of neighborhood advocates in Tulsa for decades. They have money, they hire big time lawyers, they organize, mobilize, obfuscate, cannibalize and bully their way around until the voice the average citizen is barely audible if at all.

They get their way because they influence elected officials who make the critical appointments to Boards and Commissions that ultimately decide how development proceeds in your community. They are not above using fear and intimidation to scare people into siding with them and they are not easily deterred.

The result is and has been an imbalanced planning commission membership heavily favoring commercial real estate interests. When important zoning matters come before the planning commission the main players (like Hilcrest and QuikTrip in this instance) mobilize and go to work to protect their interests. In and of itself there is nothing wrong with that.

However, it is not alright for these businesses to completely disregard the interests of their neighbors and the larger community they share with them. Unfortunately and all too often, that is exactly what happens as is the case with the Pearl District Form Based Code expanded regulating plan.

On the one hand you have a group of hard working citizens who have worked for years to develop a “form‐based” approach, based upon sound urban design principles which would allow for increased development density, vibrant walkable neighborhoods, and a successful mass transit system.

This group is not trying drive out businesses or automobiles but to create a diverse neighborhood with a sense of place. Their voices have been all but drowned out because of these dominant businesses with deep pockets that appear to be interested only in advancing their own cause, regardless of how it affects their neighbors.

Let’s not forget the proposed new regulations will not mandate change to existing structures but govern only new construction projects and extensive remodels. It does not require any business to change the design or use of its current building. Only new developments are guided by the new standards.

There are multiple reasons for people’s resistance to change, including fear, uncertainty, lack of trust, and inflexibility. Some are so vested in protecting the status quo they never consider change, no matter how clear the benefits of change would be.

Right now things are not looking too good for the Pearl District. It appears the iceberg is about to chalk up another one.

Tulsa World Editorial Misses the Mark The Good ol' boy network is alive and well
May 1, 2017