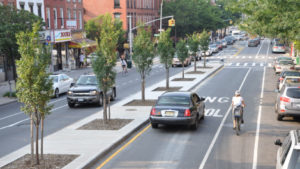 Tulsa’s road-building legacy and policies of the past have proven to be fiscally unsustainable. Prior to passage of the current Fix Our Streets program, Tulsa’s Complete Our Streets Advisory Council identified approximately $1.1 billion dollars in needed repairs to maintain the city’s streets over the next decade.

That figure unfortunately did not include new construction, the widening of arterial streets and or planned improvements to major intersections. Those additional capital projects were projected to cost another $500 million and will require their own maintenance costs.

The Advisory Council also found that Tulsa’s revenues have not kept pace with the cost of maintaining our infrastructure. A comparison with our peer cities indicates that our population is less than would ideally be desired to support maintenance of our 1,217 lane miles of arterial streets and 465 lane miles of expressways.

One of the Advisory Council’s recommendations included the concept of increasing sales-tax revenue through land development policies that would help offset the cost of transportation infrastructure. With that goal in mind it would have been enormously beneficial if the PlaniTulsa initiative had been completed prior to the passage of Fix Our Streets but that was not the case.

The package that was ultimately approved did very little to encourage better designed streets that provide attractive walkable environments that support land uses that are more productive. Fix Our Streets was almost entirely devoted to improving the so called pavement condition index (PCI) and not much of anything else.

Tulsa’s new comprehensive plan was adopted in the summer of 2010. It was the product of unprecedented public engagement, developed with the guidance of thousands of Tulsans, stakeholders, City staff, and a volunteer Citizens Team.

Based upon a set of guiding principles citizens set out to reinvigorate Tulsa and the economy, to attract and retain young people and to provide them with opportunities to raise their families, and to connect our communities with diverse transportation options, through sound land use planning.

Clearly stated in the Vision document which guides the plan is the following: ‘Tulsans will have a wide variety of transportation choices for getting around town. Those who live in neighborhoods near the city’s major boulevards will be able to drive, bike, or catch a quick and reliable bus or streetcar to just about anywhere. The network of transit options, large arterials, pedestrian friendly neighborhoods and employment centers will result in one of the safest, most efficient transportation systems in the country.’

Two concepts were identified as a path towards implementing the new strategy, building the city’s multi-modal street system and enhancing transit. These make up the fundamental building blocks of the city’s future transportation system, and are designed to work hand-in-hand with land use policy by way of a Context Sensitive Solutions process.

This installment reflects on the first building block, building the city’s multi-modal street system. As stated in our Comprehensive Plan’s Transportation Chapter Conclusions, ‘Tulsa’s planners and engineers have built a roadway system that moves automobiles very well. But, the emphasis on the automobile has come at the expense of other transportation choices.

Thus the reasons for modifying the planning, programming and implementation of transportation programs in Tulsa are less a matter of mitigating traffic congestion and more about equity for all users and new economic development opportunities that can be realized with transit and unique street designs. Using Tulsa’s transportation networks more efficiently will also contribute to the fiscal sustainability of the system.’

The process begins by acknowledging that transportation defines communities. In the same way that roadways spur development today, transit options and ‘living’ streets designed for the pedestrian help create an urban experience that attracts new businesses and young people in the 21st century economy.

At the urging of Tulsa’s Transportation Advisory Board, the Mayor and City Council adopted earlier this year a “Complete Streets” policy to create a comprehensive, integrated, and interconnected multi-modal network of Complete Streets for the City of Tulsa that supports sustainable development and balances the needs of all users in order to achieve maximum functionality and efficiency.

The purpose of this policy is to set forth guiding principles to be considered in all transportation projects, where practicable, economically feasible, and in accordance with applicable laws and ordinances, so as to provide accommodation for walking, bicycling, other non-motorized forms of transit, in addition to motorized transit, including personal, freight, and public transit vehicles.

This new policy insures that  future street projects in the City of Tulsa will be planned, designed, and operated, when possible, in accordance with accepted recommended best practices for Context Sensitive Solutions, as outlined by the Institute of Transportation Engineers in Designing Walkable Urban Thoroughfares: A Context Sensitive Approach, as amended and/or updated, to provide for a balanced, responsible, and equitable way to accommodate all users including pedestrians, bicyclists, public transit riders, freight providers, emergency responders and motorists.

The adoption of the policy is just the beginning.  Actual implementation will be much more challenging.  As of this moment, city staff, working with an outside consultant, is developing a complete streets procedures manual which is nearly finished. It will be used to guide the design and construction of future street projects.

Ideally, Tulsa’s new streets will be designed to reinforce connectivity within and throughout the city. Connected streets decrease traffic on adjacent arterials, shorten distances, and improve conditions for walking and biking.

Disconnected streets may enhance privacy and discourage through traffic, but they also hinder walking and biking, and create longer car trips. Tulsa’s new street systems will use connectivity and traffic calming to get the best of both worlds — quiet neighborhood streets with good access and connectivity. Among the biggest changes that will take place are thousands of small but important improvements to the city’s walking infrastructure. Many neighborhoods, which today are dangerous places for pedestrians, will be improved with safer sidewalks, better-designed intersections, and other features that alert drivers to pedestrians. The city will continue to develop and expand its network of paths and trails. Bikes will be a popular way to get around town and will make up an increasingly significant percentage of travel.

Obviously, these changes will require additional investments and the commitment of our elected public officials to make these investments will be crucial to our long term success.