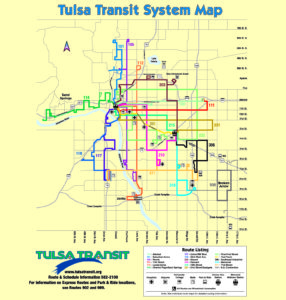 Our comprehensive plan maintains unequivocally that an improved transit system can help us realize our vision for Tulsa because it enables the City to increase tax revenues without extending infrastructure and enables denser development because of a reduced need for parking and roadway widening.

But the benefits of an expanded transit network go far beyond that. Unfortunately, many people, including some elected officials resist transit investments because they do not use it now and doubt they will in the future. Increasingly, however, we find that we all have something to gain with a greatly expanded transit network that provides a wider range of options than exist today.

Here are a few ways people who don’t regularly use mass transit still benefit from it. If you travel by car, you ‘use’ the bus system each day to make your life on the roads easier. Those riding the bus reduce congestion levels and reduce the time that you spend in traffic.

Transit users reduce wear and tear on the city’s streets which you share the cost of maintaining; and they reduce demand for daytime parking spaces, for which you compete. Sometimes you may need to use transit, when your car is in the shop, to get to an important event or when the snow is 3 feet deep.

Access to mass transit can save you money when members of your family use it, your children, for example, instead of taking the car for every trip. A better transit system improves property values. So if you own property near transit you are ‘using’ the transit system to benefit from it.

Here are some other reasons why Tulsa needs a much better transit system. Because the elderly and aging baby-boomers are going to need and want it as they get older. Because young people want it too: a good mass transit system is among the most important factors in making a city attractive, convenient and livable.

Because mass transit is among the most important determinants of a city’s livability and a key factor in creating jobs and attracting and retaining young educated professionals, so vitally important to our growing employers.

Because Tulsa’s bus system is among the most poorly funded in the country. For instance, Tulsa’s service levels are 38% below the average of eight peer cities in terms of service hours per capita. Our competitors are all investing in improved services, including Oklahoma City, Austin and many others.

Because only 60% of Tulsa’s population lives within a 5-minute walk of a bus stop, the current system is not attractive to choice riders. The system’s growth is severely hampered by automobile oriented street design, low population density, and the lack of complementary pedestrian and bicycle infrastructure.

Because mass transit is crucial to the health of people on lower and fixed incomes that depend on mass transit to get to grocery stores selling a wide range of good food and healthy produce in particular. ‘Food deserts’ are exacerbated when residents have limited access to the choice of nutritious food stores.

Because the alternative… funding the addition of more lane miles to existing and new roads in order to reduce congestion does not solve the problem, but merely induces more demand, until the new lanes are also congested. Experts have compared widening roads to loosening your belt to solve a weight problem. Because adding and maintaining lane miles is more expensive than building and sustaining an effective mass transit system.

Public transportation plays an important role in providing answers to the enormous challenges facing our nation, our state and our city today. Whether it’s more jobs, a cleaner environment, energy independence or a better quality of life, public transportation helps us get there.

Beyond just improving mobility, transit services can also help shape land use and development patterns, and support public policies regarding energy use, air quality and carbon emissions. All of these characteristics can be important when considering the benefits, costs and optimal investment levels for public transportation.

Another important benefit of transit includes transit-oriented development, a strategy that seeks to expand transit for the purpose of promoting economic development in underserved areas that lack adequate access to transportation.

Similar to how the streetcar suburbs of the past defined areas like Sand Springs, the provision of new transit into areas of growth as defined by PlaniTulsa’s Vision for Tulsa can promote a land development pattern that is much more dense, livable and sustainable from a fiscal and environmental standpoint. Most of these Transit Oriented Development opportunities center on fixed guideway systems such as streetcars and light rail.

If we insist that our transportation planning is at the core of our urban planning and design, it will lead to a more compactly built environment which creates ‘feeds’ into the stations and stops of the transit corridor. This will at the same time allow the creation of centers around the transit hubs, serving passengers’ daily commercial needs and public services, which significantly reduces urban sprawl.

Obviously, based upon where we are now, we have a long, long way to go to build an effective mass transit system. The good news is we have a plan, a good comprehensive plan.

We will begin by investing in two or three key corridors with frequent bus service to downtown from North and East Tulsa. Over time, key housing and employment developments will add riders, and enhancements will spread throughout the city.

As previously stated our present system is seriously underfunded and the long-range planning and development of an effective and efficient system will require substantial new investments. In a future column we will explore some of the myriad of potential funding options that might be considered.