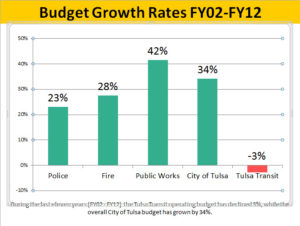 Tulsa’s transit system funding and services fall well below the levels of many of our competitors. It is symptomatic of the urban sprawl and auto centric mindset which has prevailed in our community since the 1950’s.

While our bus service has seen its better days, it has arguably never rivaled the service levels of cities that place a higher value on transit and see it as a basic core service. Our system took a huge hit in the Fiscal Year 2010 Budget. As a matter of fact, transit funding has traditionally been one of the first to suffer major cutbacks when budget revenues decline in challenging economic times.

According to our Comprehensive Plan, adopted in 2010, Tulsa’s mass transit system should ideally match in quality and service those of our peer cities in order to compete effectively in the 21st century. Unfortunately, our service levels are presently 38% below the average of eight peer cities in terms of service hours per capita.

Why can’t we go on funding the bus system as we are now? Because a strong transit system is a key to Tulsa’s livability, to changing demographics, to the financial security of families and to the increasing proportion of people who prefer to travel by mass transit or are unable to drive.

Relying on sales tax revenues from the general fund, our present system is seriously underfunded and the long-range planning and development of an effective and efficient system will require substantial new investments.

Tulsa Transit’s annual budget is approximately $18 million in total, of which the City of Tulsa currently funds about $7.8 million. A fair comparison is Austin, Texas, which invests a total of approximately $275 million a year, which includes federal, state and local funding.

In spite of our comprehensive plan’s mandate to expand our transit system, very little has been accomplished since it was adopted. If not for the efforts of advocacy groups like the Transportation Advisory Board, Transit Matters and others our transit system would be even further behind.

While the City Council has approved modest increases in transit funding over the past couple of years, the present Mayor has shown little appetite for making any dramatic improvements to the system.

On October 11, 2012 the Council asked the Transportation Advisory Board to provide it with some recommendations for putting Tulsa’s mass transit system on a more stable and long-term financial footing, and for identifying the benefits and justifying the investments needed to develop a transit system that matches our competitor cities.

As Vice-Chair of Tulsa’s Transportation Advisory Board I collaborated on and co-authored a set of recommendations that are scheduled for presentation to the Administration and City Council this month. Accompanying those recommendations is a supporting discussion document providing the basis for the recommendations.

In this column, I am speaking only for myself and not in any official capacity representing the Transportation Advisory Board. Nevertheless, many of these observations borrow liberally from those previously mentioned documents.

The TAB Recommendations encourage the Mayor and Council to adopt a resolution that clearly defines the City of Tulsa’s commitment to implementing the Comprehensive Plan’s Vision, Strategies and Goals for a vastly improved and expanded transit system, including a much wider range of transit options including high frequency traditional bus service, bus rapid transit (BRT), streetcars, light rail (LRT) and commuter rail.

The recommendations also conclude that the City of Tulsa must make two very important decisions before we can seriously move forward with expanding our transit system.

First, we need to determine the most efficient and most appropriate system of governance to oversee and develop an expanded transit system serving the City of Tulsa and potentially the metro region, whether it is an expansion of MTTA, or a newly created city or regional transit authority.

Secondly, the City must examine the best practices of our peer cities to determine the most appropriate potential sources of funding to support both operating expenses and capital investments of an expanded transit system.

The TAB also recommends that the Mayor and Council organize, assemble, and define roles and responsibilities of two separate tax forces whose mission shall be study and report back on the governance and funding issues. Significant progress is not possible until these important decisions are made.

So, how do our peer cities fund mass transit? There are a surprising number of options available, although it depends on the local state law and on whether the system is operated by a city or a region. Just a few funding sources are: sales tax, property taxes, fuel taxes, user fees, vehicle registration fees, Hotel/Motel taxes, Utility Fees/Taxes, Special Assessment Districts, Tax-Increment Financing Districts.

The common denominator of cities with effective transit systems is a source of dedicated funding. Dedicated and predictable funding facilitates the long-term planning required to bring us up to competitive levels of performance. It would likewise facilitate the integration of land use planning and ‘value capture’ to stimulate transit-oriented developments and to provide more and better choices in housing.

Several criteria should be applied when selecting a funding source. First and foremost is the financial effectiveness. A desirable revenue source must yield the funds required for the needs it is designed to address, be stable over time, and have the potential for growth.

Another criterion is to evaluate the efficiency of the transit system. Because fees can influence behavior, revenue sources for transportation ought, where possible, to be structured in ways that encourage efficient use of the transportation system.

We also consider the fiscal efficiency. When taxes, fees, and charges are easy to collect, simple to understand, inexpensive to administer, and resistant to fraud, they are said to be fiscally efficient.

Another consideration is social equity. How a transit system’s costs and benefits are distributed, as well as how transportation-related taxes, fees- and charges impact low- versus high-income people is important.

Naturally, the political acceptability of any finance mechanism plays a critical role; as politicians are unlikely to support fees or charges that are strongly opposed by the public.

I am proud of my volunteer service on the Transportation Advisory Board. In our Annual Recommendations, my fellow members and I have provided the Administration and City Council with a sensible approach to expanding Tulsa’s transit system. Let’s hope they make the best of it.