PEDESTRIAN-BICYCLE SAFETY BENEFITS EVERYONE We must reduce bicycle / pedestrian accidents

Mayor Bynum wants Tulsa to become a world-class city.   One part of being a world-class city is having a friendly and safe environment for people who ride bicycles and walk.  Cities across the nation, as well as across the world, are finding that there are major benefits to being bicycle and pedestrian friendly and safe! These benefits include, but are not limited to:  improved health and safer roads for all. 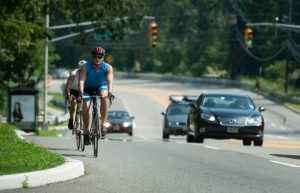 The recent fatalities of runner Michael Reid at the Sheridan crossing of the Creek Trail and of pedestrian Lavonne Pack at the 800 block of North Sheridan Road are yet two more tragedies, occurring at conflict points. There have been 49 fatality crashes involving people who walk or ride bicycles in the City of Tulsa from 2012 to 2015, many of these crashes being preventable.  Though there have been efforts to improve conditions for people who walk and ride bicycles, there is still much work to be done.

Mayor G.T. Bynum said, “One of our focus goals for this year is to reduce traffic fatalities. Over the past few years, pedestrians have made up 25% of the traffic fatalities in Tulsa, much higher than the national average of 14%. We want a healthier city, which means giving people the ability to safely be active. If our city isn’t known as a safe place to walk and bike, we’ll be limited on how far we can move the needle on overall health.”

Indian Nations Council of Governments (INCOG) has partnered with the Oklahoma Highway Safety Office to research bicycle and pedestrian safety and assist local efforts in improving safety for all who use our roads, through education and other pilot projects.   Transportation planners and GIS specialists from INCOG have recently partnered with the Bicycle and Pedestrian Advisory Committee (BPAC) to identify the top locations in the city of Tulsa for crashes involving people walking and cycling. 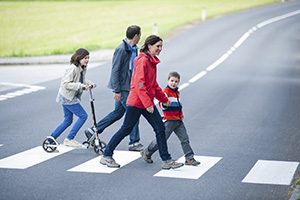 The BPAC team used crash data from 2012-2015 for their analysis and plan to create a multidisciplinary approach to visit and study these locations to identify possible improvements. The end goal is not only to improve safety for pedestrians and bicyclists, but for motorists as well; to create a balanced transportation network that accommodates the needs of all users.

The City of Tulsa is no stranger to making pedestrian and bicycle safety and infrastructure improvements. Many Tulsa residents are familiar with the recent improvements to pedestrian signage along Peoria Avenue in Brookside and the dedicated bike lanes and reconfiguration on 3rd Street and 4th Place. Both of these are examples of measures which play a vital role in transportation safety for all users. This is especially true at conflict points where the paths of automobiles, bicycles, and pedestrians merge, such as intersections or trail crossings.

In the Tulsa Health Department’s 2015 Community Health Needs Assessment, only about half of Tulsa County residents reported that they regularly participated in physical activity, and the number was even less in certain regions (less than 40 percent in downtown and north Tulsa). Poor diet and inactivity were also the most commonly reported community health concerns in Tulsa County.  Almost two-thirds of Tulsa County residents are overweight or obese.   Heart disease, cancer, diabetes, and stroke are all top ten causes of death in Tulsa County and can be caused by being overweight or obese.  Rates of these diseases are higher in Tulsa County than the United States average.

The good news is that almost 75 percent of Tulsa County residents want to make a positive change in regard to being more physically active. Safer and better connected streets, sidewalks, and bicycle infrastructure can encourage residents to be more active.  Sidewalks and bicycle lanes can serve as a safe and affordable way for people to access their daily needs; which in turn can increase foot traffic around businesses, resulting in increased sales revenues and property.  Installing bike lanes, especially protected bike lanes, can reduce injuries and promote active transportation and physical activity. Improving safety can also lead to more people using bicycles as a form of transportation. 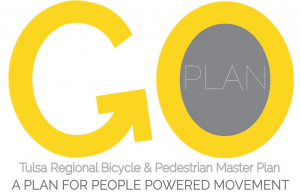 The well-researched regional bicycle and pedestrian master plan, called the GoPlan, guides city engineers and planners in making Tulsa a friendly and safe city for people who ride bicycles and walk. In addition, the Downtown Coordinating Council recently commissioned a walkability study.  We are awaiting official adoption of the GoPlan and Walkability Study by the City Council; hopefully that can happen as early as this March.

The Bicycle/Pedestrian Advisory Committee was established by the City Council with assistance from INCOG in 2011.  The committee consists of citizen advocates and representatives from City Traffic, Engineering, and Planning, Tulsa Health Department, Tulsa Police Department, Tulsa School Board, Tulsa HUB and others.  The group is hard at work to make the GoPlan a reality by prioritizing GoPlan projects, analyzing crash and safety data, planning and implementing broad-based education initiatives, and working closely with the City of Tulsa to coordinate already-planned street projects in order to stretch the GoPlan funding as far as possible.

Cyclists, pedestrians, and motorists can all benefit by playing well together. In the spirit of one of our state’s favorite sons, Will Rogers, friendliness and sharing the road can be part of the new identity of Tulsa.

What can you to do help?  Contact your city councilor and let them know you want our city to be safe and friendly for those who choose to walk and ride bicycles!

Larry Mitchell is Chair of the Bicycle Pedestrian Advisory Committee, whose mission is to advise INCOG and the Tulsa City Council and Mayor on issues related to cycling and pedestrian infrastructure, safety and equality.  He holds undergraduate degrees in English Literature and Music Education and a Masters in Choral Conducting.

He also serves as Director of Tulsa RESULTS, a nonprofit advocacy and lobbying group that supports national legislation to address global poverty, education, and health issues.

Larry is a shareholder activist speaker at annual meetings of corporations such as Caterpillar, ONEOK, and Chesapeake  about environmental and social justice concerns.

He is a former member of the Board of Directors of the Tulsa Hub, a non-profit whose mission is to change lives through cycling.  He is also a member of the Crosby Heights, Small Area Planning Committee, working with citizens, and city and institutional planners on envisioning the future of this historic neighborhood.