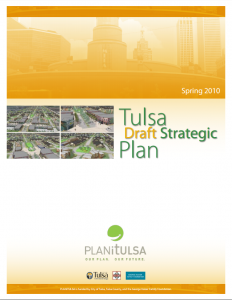 The approval of the  PlaniTulsa Comprehensive Plan in July of 2010, the first major comprehensive plan amendment in over 30 years, was celebrated by thousands in the community who had great expectations on how the new development policies and guidelines would transform the city’s built environment and sense of place for the better.  It represented the culmination of literally years of painstaking work by community leaders, elected officials, planning staff, consultants and a dedicated Citizens Advisory Team.

The exhausting process was hand wringing and teeth gnashing at times, often marked by passionate dissension, combative discussions and hard-fought compromises. So when the final resolution was signed, there was not only a sense of rejoicing but also of a sense relief that the mission had finally and dutifully been accomplished.  As it turns out that may have been the easy part, as evidenced by what many perceive as the anemic pace of the plan’s implementation since then.

Despite the collective efforts of an undersized but dedicated city planning department, a large portion of the implementation to-do list, remains ahead of us. After PLANiTULSA was adopted, in July of 2010, a Draft Strategic Plan was presented to then Mayor Dewey Bartlett, which included the PLANiTULSA team’s recommendations for the plan’s first-steps and implementation strategies.

Almost simultaneously, some key members of PLANiTULSA’S Citizens Advisory Team approached the mayor and proposed that he form a citizen’s oversight and accountability committee, to track progress and make recommendations on how to insure that the plan’s targeted goals were met in a timely fashion.

Regrettably, Mayor Bartlett declined to embrace either proposal.  He did not support adoption of the Strategic Plan as public policy, and he did not support the idea of a citizen’s oversight team.  Combined with the limitations of an overburdened and under resourced planning department, the often times disappointing plan implementation progress has been predictably slower than hoped for.

For instance, page 13 of the Strategic Plan Draft, indicates a desired goal of completing the update and standardization of 12 existing small area plans, all adopted before PLANiTULSA, to take 12 to 18 months.  That implies first, a review of the plans, and second the TMAPC adoption of the updates.  In actuality, the review took somewhere close to five years (2010 to 2015).

An important milestone has been reached

So when that particular goal was recently reached, it did so without fanfare or mainstream media coverage.  On December 16th, 2016, the Tulsa Metropolitan Area Planning Commission, adopted TMAPC Resolution No 2736 961, “to concur with the findings and recommended actions contained within the City of Tulsa’s Adopted Small Area Plan Review Project Report,” by the Planning and Development Department.

To complete the matrix, staff determined whether the plans provided land use recommendations that can be converted to PLANiTULSA’s building blocks and/or transportation elements. Consideration was also given to the status of easily identifiable public projects and whether incomplete projects were feasible.

Each plan’s analysis was summarized and recommended for one of the five actions. Eight of the twelve plans were recommended for one of the following: Continue implementation, supersede by PLANiTULSA, supersede by other SAP or roll into other SAP’s. So the TMAPC, by their actions, effectively eliminated eight plans from the Strategic Plan’s To-Do list, by either superseding them, retiring them or rolling them into other plans.

The other four plans, including the Brookside Infill Plan, the Riverwood Neighborhood Implementation Plan and the East Tulsa Phase I and Phase II plans were recommended to Return and Readdress, which comes as good news for those neighborhoods.

On the more sobering side, no schedule has yet been set for re-addressing those four plans which in some cases will involve re-engagement with the area’s stakeholders in meetings and hearings, that could conceivably take another 18 to 24 months.  And then there is the matter of other SAP’s, some approved only months after the comp plan approval, that also need urgent attention, like the Downtown Area Master Plan for instance.

This is notable for several reasons.  First, it’s an unpleasant reminder of just how slowly the wheels of progress turn when it comes to implementing the city’s adopted land-use policies.  Second, it challenges us to adopt practices and protocols that might help expedite the realization of outcomes we typically envision when formulating and adopting plans in the first place. It is not too late in the game for a comprehensive plan oversight committee to be established and put to work. That would be a widely welcomed action of the city’s new administration.

Hats off to the City of Tulsa’s Planning and Development Department, under the able leadership of Dawn Warrick, for their steadfast determination to chip away at a formidable list of planning objectives which grows daily, in spite of a challenging shortage of personnel.  While some new planners have been added recently, the thought here is that we must ramp up our assets if we want to keep pace with those cities we compete against. Time is of the essence, and investments in planning staff and resources – along with a renewed commitment by the Bynum Administration to PLANiTULSA and its aggressive implementation would benefit all Tulsans.

Monitoring Change:  With the Tulsa 2030 Goals as targets, a Monitoring Program  was developed to review quantifiable measures and track progress towards achieving the Vision. In 2015, 24 indicators were measured and the 296 Action Items outlined in the Comprehensive Plan were reviewed. The 2016 Progress Report provides a summary of the data findings and accomplishments by component for the last 5 years.

As of the end of 2015, 219 Action Items are identified as In Process, Ongoing or Complete indicating that some action has occurred. This means 74 percent of PLANiTULSA’s implementation is underway!