PLANNING STRATEGIES – PART 2 of 10 Reduce reliance on the automobile

Reduce Reliance on the Automobile

The population density of urbanized Tulsa has fallen from 12,700 people per square mile in the heyday of the 1920’s to less than 2,300 people per square mile in 2002. Lower densities and segregated land uses have combined to create a suburban environment entirely dependent on the automobile for personal transportation.[1] Currently, the vast majority, approximately ninety percent of trips in Tulsa are made by automobile; most with only one vehicle occupant.

The number of vehicles per person and the number of vehicle miles traveled have been increasing steadily for decades.[2] Since approximately one third of the population, including children, elderly, the poor and the disabled, is unable to drive this creates inequities and reduces the freedom of movement of the carless.[3]

Tulsa’s public transit system is inadequate and has one of the lowest shares of riders in the country per capita.[4] Reliance on the automobile has also raised public health issues including poor air quality contributing to higher rates of asthma and sedentary lifestyles leading to obesity and diabetes.[5] 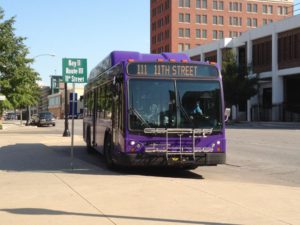 We need to reduce our reliance on the automobile. The primary mode of transport should be human power by walking and cycling.[6] The only way walkability will be practical in the long run is to increase density and to mix uses so that the preponderance of daily needs is with in a quarter to half mile radius of residences.[7]

The convenient location of goods and services make pedestrian environments highly desirable to residents, especially those wanting to eliminate the nine to ten thousand dollar annual expense of owning and operating an automobile.[8] However, fundamental land use shifts of this type will take time to accomplish. We can begin making changes to the transportation system immediately. 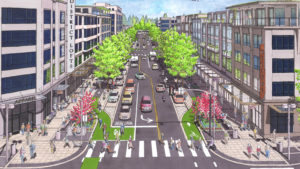 Design standards for streets should be modified for the slower speeds which will support narrower lanes with less paving.[11] Furthermore, slower speeds should also make roads safer, reducing the number and severity of motor vehicle accidents.[12]

Highway expansion and widening should cease; in fact, some highways that have reached their useful lives such as the inner dispersal loop should be removed altogether and replaced with surface boulevards.[13] Spending on highways should be redirected to sidewalks, bike paths and bridges or tunnels to cross highway barriers. Alternative connections to interstate destinations, for instance a high-speed rail line connecting Dallas and Chicago via Tulsa should be studied further and advanced.[14] 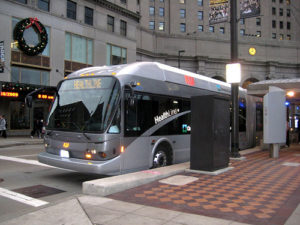 The public transit investment should focus on both improving coverage and frequency of service. A combination of greatly expanded conventional bus service and bus rapid transit would be less costly and implemented much more quickly then the more expensive rail technologies.[15] They are also much better suited to our lower densities and offer more flexible routing. The hybrid buses can run on diesel / compressed natural gas or electric power.[16]

A loop system topology utilizing the arterial street grid is easier to understand for users and should replace the current hub and spoke topology.[17]

As better transit and pedestrian amenities become available a series of small car free zones can gradually be phased-in at locations with regional significance, the first located downtown.[19] By that time, rail transit may also make more sense.

[1] Historic population densities for Tulsa’s urbanized area are available from the Urban Mapping Study of the Tulsa Region completed by OU Urban Design Studio in 2003. Refer to the tables and charts on pages 13 and 14 at: http://tulsagrad.ou.edu/studio/mappaper/mappaper.pdf.

[2]  Tulsa’s travel characteristics are summarized well in the Regional Transportation Plan: Destination 2030 produced by INCOG. The full report is available at www.incog.org with the results referred to here on page 11: http://www.incog.org/transportation/destination2030/PlanFinal/PlanFinal1-Introduction.pdf.

[4] The transportation consultant for PlaniTulsa, Kimley-Horn, has compared Tulsa’s transit ridership to the peer cities of Albuquerque, Charlotte, and Salt Lake City and has found Tulsa to have far lower ridership and lane miles of transit. Their comparisons are summarized on pages 113 through 118 of a PowerPoint presentation available on the PlaniTulsa website: http://www.planitulsa.org/files/pdf/tulsa-partners.pdf.

[5] A comprehensive summary of research relating land use and transportation to health issues can be found in “Understanding the Relationship between Public Health and the Built Environment” by Reid Ewing and Richard Kreutzer prepared for the LEED NC Core Committee of the United States Green Building Council (USGBC) in May 2006. It is available at the USGBC website: http://www.usgbc.org/ShowFile.aspx?DocumentID=3901.

[6] The City of Calgary, Alberta, another extremely car dependent city, has recently completed a new comprehensive plan, coincidently called Plan It Calgary. The transportation portion of the plan defines a new transportation hierarchy for the city which emphasizes consideration for planning and design of transportation modes from the most important to least important in the following order: walking, cycling, public transit, commercial vehicles, car pooling and single occupancy vehicles. See page 3-3 of the Calgary Transportation Plan: https://www.calgary.ca/Transportation/TP/Documents/CTP2009/calgary_transportation_plan.pdf.

See also the portion of the plan addressing active transportation (walking and cycling) on page 3-6. An excellent additional source of information on implementing active transportation can be found at the Pedestrian and Bicycle Information Center, which has a 258 page compendium of case studies of successful projects from around the country: http://drusilla.hsrc.unc.edu/cms/downloads/pbic_case_study_compendium.pdf.

[7] A paper entitled “Walking and the Built and Natural Environment” presented by Rob Boer, Michela M. Zonta, Deborah A. Cohen, and Adrian Overton presented at the 2004 National Household Transportation Survey (NHTS) Conference uses NHTS data to show a strong relationship between the probability of walking and both dwelling unit density and business density:  http://www.trb.org/conferences/nhts/Boer.pdf.

[8] Research by the American Automobile Association (AAA) puts the average annual vehicle ownership and operating costs to be $9.122 for a passenger car and $11,599 for a Sport Utility Vehicle (SUV) based on 15,000 miles of travel in 2013. See the news article from the AAA at: https://www.ok.aaa.com/news/member-news/driving-costs-increased-nearly-2-percent-year-aaa-says-annual-average-driving-costs.

[9] John N. LaPlante and Barbara McCann writing in the May 2008 Journal of the Institute of Transportation Engineers summarize the costs and benefits of slower speeds including travel time impacts on page 26 of “Complete Streets: We Can Get There from Here”: http://www.smartgrowthamerica.org/documents/cs/resources/cs-ite-may08.pdf.

[10] As reported in “New Thinking for a New Transportation Age” the Research Transportation Board’s 1985 Highway Capacity Manual indicates that the maximum vehicle lane volume occurs at 30 miles per hour. A summary is available from the Local Government Commission at: http://www.lgc.org/wordpress/docs/freepub/community_design/focus/new_transportation_age.pdf.

[11] Portland adopted revised ordinances for “skinny streets” in residential areas in 1991. According to Reid Ewing,Ted Stevens and Steven J. Brown, writing in Urban Land, August 2007, concerns about emergency access for fire trucks and reaction times are not overwhelming and many fire departments now support them. Michael Coleman of the City of Portland has even conducted trials for various traffic calming methods to study response delays: http://www.ite.org/traffic/documents/AHA97I38.pdf.

[12] The Victoria Transportation Policy Institute’s Traffic Demand Management (TDM) Encyclopedia indicates that accident rates decrease up to 3% for every 1 mile per hour reduction in traffic speed for higher speed roads: http://www.vtpi.org/tdm/tdm105.htm. Researchers at Australia’s Monash University’s Accident Research Centre have studied this question extensively and report their findings in:

“The Impact of Lower Speed Limits in Urban and Metropolitan Areas”: http://www.monash.edu.au/muarc/reports/muarc276.pdf.

[13] The Congress for New Urbanism website has case studies from cities that have removed expressways, including Portland’s Harbor Drive, Milwaukee’s East Freeway and San Francisco’s Embarcadero: http://www.cnu.org/node/609. As reported in the Guardian Newspaper, Seoul, South Korea completed removal of a downtown highway that carried 160,000 vehicles per day in 2006: http://www.guardian.co.uk/environment/2006/nov/01/society.travelsenvironmentalimpact.

[14] The Federal Railroad Administration completed an extensive feasibility study for nationwide high- speed rail in 1999: http://www.fra.dot.gov/eLib/Details/L02833.  A South Central Corridor including connections from Tulsa to Oklahoma City, Dallas and San Antonio was designated by the administration in 2002.

[16] The Department of Energy has several case studies of bus fleet experiences with alternative fuels, including fleets in New York, Washington and Knoxville, Tennessee, at the Alternative Fuels and Advanced Vehicles Data Center: http://www.afdc.energy.gov/afdc/fleets/transit_experiences.html.

[18] The California Center for Innovative Transportation at the University of California at Berkeley and Caltrans has overviews of Intelligent Transportation System (ITS) technologies including automatic vehicle location, traveler information sharing, traffic signal priority and others at: http://calccit.org/.

[19] Car free zones are currently rare in the United States but are becoming better known and some cities are beginning to experiment with them. The Christian Science Monitor ran an article about them in May 2007: http://www.csmonitor.com/2007/0502/p01s03-ussc.html. Car free zones are quite common in Europe. In a well-illustrated example, Jan Gehl, Lars Gemzoe, Sia Kirknaes, and Britt Sternhagen Sondergaard document the transformation of public spaces in central Copenhagen from parking lots in the 1960s back to squares and promenades in New City Life from the Danish Architectural Press: 2006.