PLANNING STRATEGIES – PART 5 of 10 Focus on streets: the primary public space of the city. 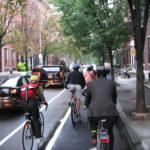 Streets are the primary public space of our city and should be treated as such. Several years ago the planning magazine, Planetizen, listed Mingo road as one of the ten worst streets in North America.[1] In the article.   They state that the major arterial streets in Tulsa are absolutely horrific and might have made the list.

Streets are not just for transportation; they have environmental, economic and social importance. 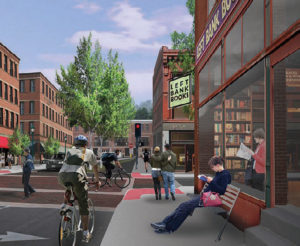 Streets should be multi-modal encouraging pedestrian, bicycle and public transport, as well as automobiles.[2] A grid or network system of streets is better for dispersing traffic than a hierarchical tree collector system that causes congestion.[3]

New developments should have multiple entries and connections to surrounding streets and other developments. Cul-de-sacs should be avoided and existing streets should not be closed to create super-blocks.

A comprehensive street department with the ability and the authority to bridge the divides between these entities is needed to insure the overall vision of the street is served.[4]

A comprehensive generalist, such as a landscape architect or urban designer, should lead all street improvement projects; not an engineer.

While the specialized expertise of the traffic engineer and civil engineer are essential for good street design and construction, their training does not emphasize the social, psychological and aesthetic aspects so important to a successful integrated street.

We should encourage socially responsible driving, calm traffic and reduce the reliance on signs and signals. Every effort should be made to improve the walkability of streets.[5]

All streets and sidewalks should be accessible to the disabled.[6] Physical and visual cues should be used, including raised crosswalks, textured paving, narrower and fewer lanes, smaller curb radii and on-street parking.[7] 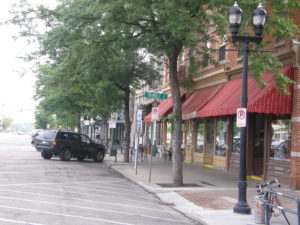 On-street parking would also encourage retail economic development and reduce large off-street parking lots. Paving and landscape materials should be more diverse with less reliance on asphalt and concrete. A plan to use a different design vocabulary on individual arterial streets would create a sense of place and eliminate monotonous streetscapes.

Buildings should be allowed to front streets with minimal setbacks to define the urban space.[8] Large parking lots in front yards should be discouraged and signage thoughtfully controlled.

A program to bury all utility lines should be initiated to coincide with street improvements.[9] Burying lines not only removes a visual blight, but allows for street trees, reduces the risk of collision with a utility pole and reduces potential outages due to ice or wind damage. Meters, valves, transformers and equipment should be buried or hidden.

[1] Mingo Road ranked ninth based on the seven point criteria used by Planetizen in 2001. The article is still available at: http://www.planetizen.com/node/15.

[2] The National Complete Streets Organization has resources showing the benefits of streets designed for all users: http://www.completestreets.org/. Federal legislation has been introduced and is currently under consideration that federal infrastructure investments are made in complete street construction.

In Europe the shared space movement, inspired by the work of innovative traffic engineer Hans Monderman, is promoting streets shared by pedestrians, cyclists, cars, buses, trams in one space without the usual lane markings, traffic signs and signals: http://www.shared-space.org/. The approach relies on risk compensation behavior by users to avoid conflicts and has led to remarkable results in accident reduction. For an extensive discussion see: Traffic: Why We Drive and What It Says about Us by Tom Vanderbilt (2008: Knopf), Chapter 7.

[3] The Washington Post reports in its March 22, 2009 issue that the Virginia Commonwealth Transportation Board has adopted statewide requirements requiring connecting streets and prohibiting cul-de-sacs in all developments. The rules also reduce the width of streets. The agency maintains almost all of the streets in Virginia. View the article at: http://www.washingtonpost.com/wp-dyn/content/article/2009/03/21/AR2009032102248.html?referrer=emailarticle.

[4] Tulsa had an independent, elected Streets Commissioner responsible for street issues prior to Tulsa adopting the Mayor and Council form of government.

[7] Numerous traffic calming measures are discussed at the FHWA site: http://www.fhwa.dot.gov/environment/tcalm/index.htm. The Project for Public Spaces has other examples at its Traffic Calming 101 page: http://www.pps.org/info/placemakingtools/casesforplaces/livememtraffic

[9] Pasadena, California has had a long range program funded by surtax on municipal utility charges to bury utility lines since 1968. The have made arterial streets their priority burying 65 miles of lines along arterials to date: http://cityofpasadena.net/PublicWorks/Street_Lighting_and_Electric_System_Undergrounding/. Like Pasadena, Anaheim has a similar program. Their website has before and after illustrations of improved arterials: http://www.anaheim.net/article.asp?id=1384.

[10] Kennebunkport, Maine has a light trespass ordinance that has become a de facto standard:

The Maine State Planning Office has created an outside lighting handbook: http://www.maine.gov/dacf/municipalplanning/docs/lightingmanual.pdf.

http://www.co.san-diego.ca.us/dplu/docs/LightPollutionCode.pdf and Tucson: http://webcms.pima.gov/UserFiles/Servers/Server_6/File/Government/Development%20Services/Building/OLC.pdf  have both adopted light pollution ordinances.