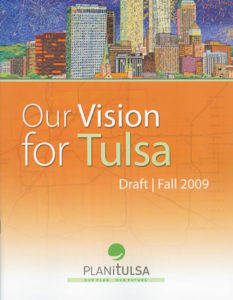 Pardon me Mr. Mayor, but the citizens of Tulsa have already spoken, and arrived at a consensus on how they want the city to grow. Thousands of Tulsans participated in the PlaniTulsa process. They worked with city planners and a nationally recognized planning consultant. Using a set of guiding principles they drafted a vision leading to a new Comprehensive Plan which is now public policy.

Mayor Bartlett has been ignoring that plan since the day he took office. It is obviously little more than an afterthought to him. Speaking at a news conference on August 15th, Bartlett said the city has gathered ideas for projects in the so called ‘quality of life’ funding from its list of capital improvement needs, from its shared goals with the City Council and through the Mayor’s ‘City Hall in Your Neighborhood’ meetings. Not a single word or reference to our comp plan, its goals or its strategies.

It’s as if the Mayor believes Tulsans obviously did not understand the question when asked what they wanted during the PlaniTulsa process. Presumably because he doesn’t agree with the answers that emerged from the massive planning effort we underwent. He apparently wants to rephrase the question in hopes of getting the answers he wants. ‘Forget about the Comprehensive Plan; let’s keep asking for input until people come to their senses’…right?

Town hall meetings have their place and I have attended many of them. But to use them to formulate a $157.9 million capital improvement package to finance quality of life projects is folly at best. PlaniTulsa utilized an exhaustive public engagement and planning process led by professionals who conducted workshops and public meetings over a period of months and years. The data which came from that process was then used to help formulate our Comprehensive Plan.

The fact that dedicated citizen volunteers and the Metro Chamber had to initiate this effort testifies to the failure of this administration to lead us. Where is the commitment to our comprehensive plan? Where is the energy, the sense of purpose? Is giving away money the best we can do? The Mayor has been in office almost three years; he has had plenty of time to forge ahead and implement the adopted Plan, instead of waiting for others to concoct a new one.

We have a very capable City Planning Director and talented planners supporting her. They should be driving an effective Vision 2025 extension, not citizen volunteers. Tulsa’s Comprehensive Plan must be the foundation and focus of our capital planning programs. A plan that extends the present tax all the way to 2029 should not and cannot be reasonably and intelligently developed in a few weeks or months. Alarm bells should be going off everywhere.

Vision 2025 is and has been an unqualified success by most any measure. I wrote a lengthy piece supporting it which was published in Urban Tulsa Weekly before that election. Like many others, I would like to continue that momentum by making smart growth investments that enrich the lives of all citizens and provide a sustainable and measurable return on investment. What we urgently need is a vastly improved transit system with efficient and reliable bus service, strategically located streetcars and light rail.

We need to invest in our downtown and our neighborhoods with functioning sidewalks, crosswalks and streetscaping. We need ADA compliant access to public buildings and infrastructure. We need well maintained and staffed parks and recreational facilities. We need safe routes to schools. We need a balanced transportation system with sufficient infrastructure and provisions for cyclist and pedestrians and transit users, including bike lanes, bike racks and covered bus shelters.

What we do not need is a hastily contrived reactionary response to a temporary setback that commits us to a long-term debt with a sketchy payback. Tulsans supported a $350 million dollar Vision 2025 economic development initiative that would have funded a Boeing assembly facility IF it located here. We didn’t win the bidding war, Boeing didn’t move here and the tax was not collected.

This ‘Vision 2’ proposal commits to $254 million in improvements to Tulsa airport industrial complex with no strings attached. The money will be collected and spent regardless of what happens with the present or future tenants. That does not sound like a sound business plan to me.

‘Vision 2’ puts the cart before the horse in more ways than one. A post on my column in last week’s UTW noted “Boeing relocated from Seattle to Chicago in 2001, not because they were given a large check by an out-of-touch Chamber or Mayor, but because it wanted to be in a city that provided the quality of life to lure highly skilled employees from other cities and employers.”

I suspect the same was true of United Airlines choice of Indianapolis over Oklahoma City for a maintenance base back in the mid 90’s. United chose Indy because of what they perceived as a superior quality of life, among other factors. All of the details of the financial packages were never revealed but from what I hear OKC partnered with the State of Oklahoma and put together a competitive offer which came up short.

But as our own Paul Harvey used to say… “and now for the rest of the story.” Indianapolis was awarded what was then described as the “economic development prize of the decade” by providing $300 million in incentives for United’s promise to create 6,000 new jobs. Seven years later the unthinkable happened. In the midst of bankruptcy reorganization United Airlines abandoned the facility that once employed 3,000 people and shuttered the plant. The Indianapolis Airport Authority, the banks, the bondholders, and Indiana taxpayers were left holding the bag.

I understand they have a new tenant now employing 1,400 non-unionized employees but we can and should learn a lesson here. Investing $250 million or $350 million in aging buildings is a high stakes gamble to say the least. As a friend recently suggested; big businesses go where they want to go and they use politicians and Chamber executives who like playing Big Daddy with government largess which marginalizes the entire process.

I understand the concern of those who see a valuable asset slipping away and who want to do something to stop the bleeding. But we need a much more closely-reasoned and analytical approach. While we still face challenges someone needs to tell the Mayor that the war is over. His “keep calm and carry on” mantra is getting us nowhere fast. He needs to crawl out of his bunker and get to work and provide some real leadership in implementing existing plans rather than trying to invent new ones. He only has a little over a year left in office so time is not on his side.