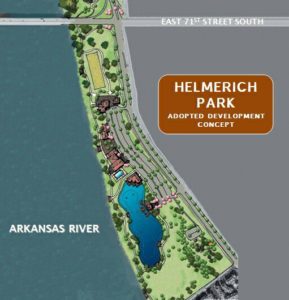 A once heralded act, spearheaded by Tulsa philanthropist Walter Helmerich, embraced by the mayor and city council, saved 67 acres along the banks of the Arkansas River from impending high density development. Now, despite being in continuous, uninterrupted use as a part of Tulsa’s riverside park land since 1991, Helmerich Park is now set to become nothing more than another common congested commercial corner.

It is March 28, 1991. Tulsa Mayor Rodger Randle announces at a press conference the donation of $2.25 million to help purchase more than 65 acres of land on the bank of the Arkansas River for the expansion of the Tulsa River Parks System.

The action was the next and newest addition to Tulsa’s escalating attempt to preserve land along the stretch of the Arkansas that runs through Tulsa and to ensure its use for park and recreation purposes.

The intent of the acquisition was reported in the Tulsa World:

CITY, INVESTORS PLAN TO PURCHASE PROPERTY ALONG RIVER FOR PARK

A joint effort between the city and private investors means a 70-acre strip of property along the Arkansas River in south Tulsa could become parkland rather than apartments and offices.

Mayor Rodger Randle, city councilors and bank director Walt Helmerich on Thursday announced a plan to buy the land at a cost of $4.5 million.

The city’s share will come from 1985 surplus sales tax and Helmerich will guarantee private contributions for the balance.

The park would be between Riverside Drive and the Arkansas River, and extend from 72st Street to Joe Creek, which is near 78th Street.

The park board will be responsible for planning and developing the park, but officials hope it will include facilities for organized sports such as baseball, softball and soccer.

FROM THE TULSA WORLD ONLINE ARCHIVE

The matter was presented to the Tulsa city council on May 7, 1991, in the first of two mandatory public hearings to amend the city ordinance governing the use of collections from the five-year 1985 third penny sales tax.

Here is an excerpt of a defining exchange from that public hearing:

CITY COUNCILOR DEWEY BARTLETT, JR.: Has the sales tax overview committee been given a presentation on this yet?

MAYORAL AIDE SUSAN SAVAGE: I don’t know, Councilor and, and I don’t, I don’t know if we’re far enough along in the process or when that would appropriately occur. But it certainly is something we can do, very easily.

BARTLETT: I would throw in that they be utilized, get their input, to make certain they’re aware of the project and are approving of it.

Secondly, if, if this were to be approved, and I assume title will be held by the City of Tulsa? Is that true?

CITY FINANCE DIRECTOR RON PAYNE: We, we’re going to recommend that title be held by the Tulsa Public Facilities Authority. And the reason for that is, that should, down the road, the City of Tulsa wish to issue a general obligation bond issue to refund, to repay itself back for the use of the sales tax money, we would have to acquire that land from someone, so we would, in fact, acquire the land from, from the Tulsa Public Facilities Authority. The reason for that, again, is so that someday if we wanted to issue a general obligation bond to pay back the sales tax funds, we would have the, the capability of doing that.

BARTLETT: If title is in the name of TPFA, could that authority transfer title on their own volition?

BARTLETT: That authority, though, is a pretty autonomous group, though, I, I assume. And could they not under, if they decided – I doubt they would – but assuming they might be given the opportunity, could they be approached by a private development to lease that or, perhaps, even purchase it? Could they, then, do that without the approval of either the city council or the city administration?

MCNEILL: I would assume that it would be like a closing; that at the time the title was transferred to TPFA, the contemporary…at the same time, there would be a lease from TPFA to the city and the covenants within that lease would prohibit them from making any sale.

BARTLETT: I would want to make certain that does occur, because I don’t want to have that, to have the authority take away the, the rights of the citizens of Tulsa to use that as a park, which is our intent at this point in time. I assume that will be part of the package. We don’t want to give someone the opportunity to take that right away from us.

You can view the entire city council public hearing on the purchase of land for Helmerich Park at: Tulsa City Council, May 1991

The Tulsa opinion shapers lauded the action of the mayor and city council as a permanent addition to the river parks system:

Now, thanks to the farsightedness of Walter Helmerich, Tulsa business and civic leader, the city has the opportunity for a rare, in-depth expansion of River Parks through the acquisition of at least 67 acres on the east side of the river between 72st Street and the mouth of Joe Creek. Along this stretch, Riverside Drive swings away from the river, opening a broad area for potential park development.

City Council members are divided on plans for developing the land as a park, with some favoring partial commercial development of the site. But any such plan should be carefully examined.

A wise plan for maximum public use of the land south of 71st Street will be recorded in Tulsa’s history to the everlasting credit of the present mayor and city council.

FROM THE TULSA WORLD ONLINE ARCHIVE

Editor’s Note:  The views expressed on this web site are those of our contributing authors and do not necessarily reflect the opinion or policy of Smart Growth Tulsa, its Trustees or Advisory Board Members, or our affiliate member organizations unless specifically stated.