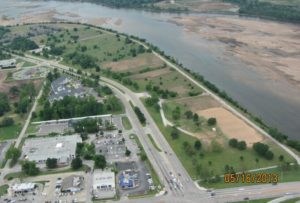 On July 28, 1991, the Tulsa Parks and Recreation Board gave an official name to Tulsa’s newest park culminating a whirlwind 75-day effort to obtain $4.5 million to buy 72 acres of land along the banks of the Arkansas River. The name Helmerich Park was chosen to honor long-time Tulsa businessman and philanthropist Walter Helmerich III who had initiated the acquisition and personally secured private sector benefaction for half of the purchase price.

Less than three months earlier, Mr. Helmerich had made Mayor Rodger Randle aware of the availability of land along the Arkansas River at 71st Street and Riverside Drive. The land was owned by First National Bank through a negotiated settlement with borrowers who were facing pending foreclosure actions resulting from non-performance.

Helmerich was serving as one of that bank’s directors and had become aware that the land was being pursued by a California development company for construction of apartments or offices. Helmerich believed, as did Mayor Randle, the narrow stretch of land would be a fine addition to the growing linear park along the banks of the Arkansas River. He informed the mayor that he would underwrite half of the $4.5 million acquisition cost and then seek local donors to gift that $2.25 million if the city would commit to fund the balance.

Mayor Randle quickly signed on with Helmerich and in a swift series of actions between late March and early June 1991, the City of Tulsa identified a source for its share of the purchase, gave public notice for and held two mandatory city council hearings, amended two city ordinances to allocate and appropriate the money, enlisted a non-profit parks support organization to borrow a million dollars in gap financing, and created a mechanism by which one of the city’s existing public trusts, the Tulsa Public Facilities Authority (TPFA), would be gifted $2.25 million for it to buy and take title to the land.

On May 7, 1991, the Tulsa City Council convened a public hearing for the purpose of allocating $2.25 million in surplus sales tax collections to Tulsa’s capital improvements fund designated specifically for the category called Park Facilities Improvements. City Council Chairman Richard Polishuk announced that the hearing was “one of two” mandatory hearings to amend the ordinance governing the five-year third penny sales tax approved by Tulsa voters in 1985.

Money from the temporary ’85 sales tax was tightly restricted. In fact, in unusual language for a city ordinance, Tulsa City Ordinance 10679 opened with the following unambiguous commitment:

“The City of Tulsa hereby officially and solemnly pledges to the citizens of Tulsa:

That all funds received by the City from the extension of the temporary sales tax levy of one percent (1%) for the period of time from and including the 31st day of December, 1985, to and including the 30th day of April, 1991, to be voted upon April 9, 1985, will be spent only for those projects and purposes set forth herein…”

“No official action shall be taken by the Council of the City of Tulsa upon any request to amend or repeal this [ordinance] until following acts and procedures have been complied with:

The Tulsa voters who approved the 1985 temporary third penny sales tax (yes, some of us are still around) and their successors, have an inviolable right to rely on the laws enacted to levy, collect, perform and administer it.

That electorate has a legal claim to its reliance that any re-categorization or other change in the use of money from a voter-approved and use-restricted revenue source will be in accordance with all adopted ordinances and public pronouncements; even 30 years later.

The 1985 sales tax ordinance and the 1991 amendment to it have been neither repealed nor publicly invalidated. Therefore, and regardless of the number of years that have passed, the mayor cannot arbitrarily redirect the use of assets acquired directly and exclusively with 1985 third-penny sales tax money.

TPFA cannot legally, or morally, be used as a subterfuge to sell off park land bought with 1985’s sales tax money for a non-park, commercial use without the direct involvement of the Tulsa City Council acting in the role specifically prescribed by existing law.

To do so rises beyond simple reliance; it becomes a breach of trust.

Editor’s Note:  The views expressed on this web site are those of our contributing authors and do not necessarily reflect the opinion or policy of Bill Leighty, Smart Growth Tulsa, its Trustees or Advisory Board Members, or our affiliate member organizations unless specifically stated.