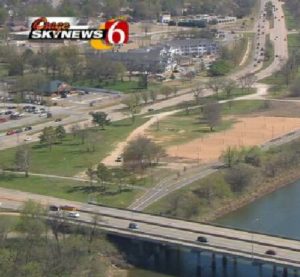 There has been a sale – a contingent sale – of approximately 12 acres of land owned by a somewhat obscure city agency called the Tulsa Public Facilities Authority (TPFA).

TPFA was created by the City of Tulsa in 1981 and continued by the new city charter in 1989. As an Oklahoma Public Trust, and by its trust indenture, TPFA is authorized to buy, own, lease and dispose of real estate. The authority principally engages in the financing, operation and maintenance of TPFA- and city-owned property.

TPFA is a stand-alone entity although the Tulsa mayor appoints the Trustees, subject to approval by the Tulsa City Council. The City of Tulsa, by ordinance, is strictly not allowed to “…transact any business for, or on behalf of, or binding upon…” the trust or its trustees.  Click to read the full city ordinance.

The sale of TPFA land mentioned above, approved by a narrow 3-2 vote, was neither authorized by nor advertised for sale by the authority.  From what I understand, the sale was privately negotiated, unilaterally, by the Tulsa mayoral staff, not the TPFA.

The land being sold is a part of open space and recreational facilities located at 71st Street and Riverside Parkway. The sign on the property clearly identifies it to be “City of Tulsa – Helmerich Park.” The city has claimed the land as one of its parks since June 1991 and has managed its continuous operation, maintenance, improvement and promotion, using public funds. In fact, the 70± acres were acquired expressly for park purposes using money from Tulsa sales tax collections that were restricted to Park Facility Improvements.

Yet, a 12-acre piece of Helmerich Park has been carved out and set aside for high density commercial retail development. This has occurred with little public knowledge or input and using an unintended loophole to distort legal requirements for the disposition of municipal land.

TPFA, not the City of Tulsa, has owned Helmerich Park since June 1991. Few, except those who attended a Tulsa City Council meeting held on May 7, 1991 (and those few who were watching the meeting at the time on the local government cable channel), knew that fact.

TPFA’s taking title to the land was the climax of a great public/private effort to acquire it. The land, on the bank of the Arkansas River, was purchased with combination of Tulsa sales tax money  and private donations given to TPFA by the City of Tulsa for the express purpose of acquiring new park land. The new park would add to the existing river-side linear parks.

Thousands of Tulsans and visitors have used Helmerich Park in its almost 25 years.  The park is home to “beach” volleyball courts, wonderful green space and a nice children’s playground. There is a delightful two-part video on YouTube of grandparents with their granddaughter enjoying the playground on a rainy day.  Click to view the videos: Part 1 and Part 2 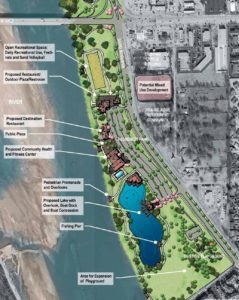 At present, much of the park is open space; however, there is a enchanting development concept for Helmerich Park in the official Arkansas River Corridor Development Phase II Master Plan adopted in 2005.  What is needed to bring it to fruition is the same sort of private sector involvement that helped establish the park in the first place. The plan is available for download at the website of the Indian Nations Council of Governments (See sections 8.1 through 8.11). There is also a PowerPoint presentation beginning on page 141 of the plan.

The title to the park’s land is inconspicuously held by TPFA in what I call obfuscatory limbo. The land was never re-acquired by the City of Tulsa as City Finance Director Ron Payne told then-City Councilor Dewey Bartlett, Jr. at the May 7, 1991 public hearing. (The remarks can be found at approximately the 00.19.05 point in the video clip.)  So now, the mayor’s office has cunningly expropriated 12-plus acres for private development in what amounts to political sleight of hand.

Now you see it, now you don’t

In the early summer of 2013, the mayor’s office (presumably in conjunction with TPFA) issued a request to the private sector “to obtain detailed proposals from qualified responders for developing the site at 71st & Riverside with emphasis on retail/recreation venues that may or may not utilize the entire site.” The RFP stated that any development would be by a ground lease. There is no mention of a sale.

According to public statements made by mayoral staff, there were no responses to the RFP for a ground lease-based development concept. Soon after the administration apparently entered into direct negotiations for sale of the land, which they have continuously maintained they do not own, which is now pending.

I’ve been unable to locate any documents, or meeting minutes of the Tulsa Public Facilities Authority authorizing the City of Tulsa to enter into direct negotiations for the sale of any part of Helmerich Park. Yet, on Tuesday, August 11, 2015, at the request of the mayor, TPFA held a special meeting at which the authority considered “a Purchase and Sale Contract for land owned” by TPFA.

This sale of what is publicly proclaimed to be “City of Tulsa-Helmerich Park” – so named by the city’s park board a quarter century ago – was accomplished absent a city council determination that the land was considered “surplus property” and was no longer needed by the city and without a public bidding process to attract the highest and best bidder.

This sale converts land specifically allocated from 1985 sales tax collections to the restricted category of Parks Facilities Improvements to so-called economic development. The 1985 sales tax expenditures policy states, according to city ordinance “… NONE of such funds shall ever be spent for any other purpose.”

This TPFA-owned land had been operated as a park exclusively by the City of Tulsa continuously since its acquisition.  In 24 years there appears to be no record that a single penny has been spent by TPFA to support the park in any way.  Helmerich Park has been operated, maintained and improved by the City of Tulsa with no known contract, lease agreement, or even a memorandum of understanding with TPFA that would allow the city to do that.  Even with such an agreement, the city ordinance referenced above would seem to prohibit it.

Slick use of technicalities and convoluted opinions by the city attorney do not cloud the reality that the City of Tulsa is the indefeasible, de facto owner of Helmerich Park. Therefore, formal disposition of the land – if deemed necessary by the city council – rests squarely with the city council.

This is a contingent sale. It is not yet final. It is time for the Tulsa City Council to rise to the occasion and use its sole powers, invested by City Charter, to stop this now-you-see-it-now-don’t political sleight of hand.

Editor’s Note:  The views expressed on this web site are those of our contributing authors and do not necessarily reflect the opinion or policy of Bill Leighty, Smart Growth Tulsa, its Trustees or Advisory Board Members, or our affiliate member organizations unless specifically stated.