TRACKING THE TRENDS OF WALKABLE URBAN PLACES — Part II What makes for a great WalkUP? 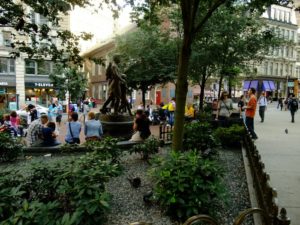 The planning principles behind what makes great WalkUPs have been coalesced under the banners of Smart Growth and the New Urbanism. The New Urbanism has been around for over 30 years and it has many areas of focus: from its origins in a desire for more aesthetically and culturally enriching towns and cities as alternatives to conventional sprawl, to environmental concerns, to social interests, to health benefits, to economic concerns. At its core, the New Urbanism is about improving quality of life and helping communities to flourish, not just today but over successive generations.

To start, the “New” Urbanism is really nothing new at all, aside from some new policy-making tools. It is a movement that picks up where traditional urbanism left off in the 1920s. Several factors came into play in the history of the United States that led to today’s dominant form of sprawl development—the worst of which James Howard Kunstler famously refers to as the “Geography of Nowhere”…where every place feels just like everywhere else without a distinction, without character, in essence, without much to love and to be proud to call home.

“There are many reasons why we as a nation changed our development pattern after WWII, but the point is that we are three generations into this experiment now and we have learned several hard lessons about how we can be building in more productive ways.”

The following are three key principles to making any great neighborhood:

The first principle at the core of great neighborhoods is walkability to a mix of uses. Our fundamental way of navigating the world is on foot and the healthiest, most dynamic, safest, and most prosperous cities are built around the notion of being able to walk to a diversity of uses for daily needs. A good measuring point for walkability is the quarter mile radius, which is about a five minute walk. It is also the distance on average that one is comfortable walking to get to a typical destination whether it be to go shopping, to go to work, to go to school, to go to a park, to go to church, etc. 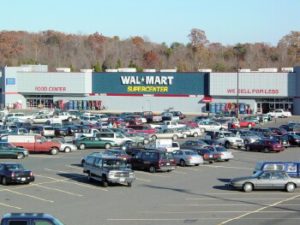 Incidentally, while this is a good rule of thumb, much about the distance we are willing to walk has to do with the quality of the place where we are walking. Steve Mouzon likes to say that if you drop an American in Rome, most of them will happily walk up to two miles to a destination. Conversely, place a Roman in an American parking lot, and even to someone accustomed to walking great lengths a quarter of a mile suddenly feels like an eternity. It is not that we are especially lazy and Europeans are naturally more inclined to activity, but our auto-dependent environments are such undesirable places that we seek to spend as little time walking in them as possible.

One of the many issues we are struggling to combat in the single-use model of zoning is the lack of access to basic goods and services for anyone too young, too old, or not financially capable of driving. This makes aging-in place a difficult thing to do in suburban neighborhoods, causes a feeling of being trapped and unable to explore independence in teenagers (partly attributed to the rising rates of depression and suicide among teens), and places considerable burdens on those living below the poverty level (there are more people below the poverty line living in suburbia than in cities[1]). This last aspect is especially problematic because it is far more difficult for people in the suburbs to get to the services they need. 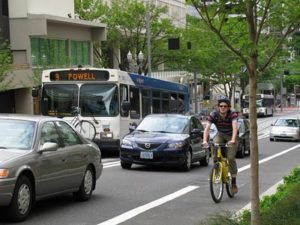 Hand in hand with walkability is bike and transit access. What many of the Millennials and Boomers desire is to be able to reduce the number of cars they own. Look at the explosive growth of car sharing services like Zipcar and Uber. Keep in mind that walkability is not about getting rid of the automobile. It is pro- having options, and providing safe streets and complete streets for pedestrians, bicyclists, buses, street cars, and automobiles alike is a part of delivering those options. According to the most recent report published by the AAA, the national average cost of owning and maintain a sedan is $8,700 / year.[2] Imagine what having an additional $725 per month to put toward savings or a mortgage could mean for the average family.

Another emphasis on walkability comes from the perspective of healthy living. According to the National Institutes of Health the second leading cause of preventable death among Americans is due to a lack of exercise and poor nutrition. 365,000 people die annually in America from preventable diseases. Only 20 percent of Americans get their required daily exercise while all that is required is 30 minutes of walking per day.[3] There are interesting ways that communities are trying to encourage walking in addition to good urban design. For instance, some local schools have implemented “walking buses” where a chaperone or “bus driver” walks to the doorstep of children’s homes and walks a group of students to school. Roy Clark and Kendall Whittier offer good local examples of the walking bus. 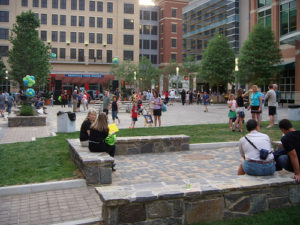 Spatially defined gathering places are the medium of public life. Civic life unfolds in the streets and squares of our cities where any number of activities may take place from organized events to chance encounters with friends and colleagues. There are certain characteristics of places that make them successful, and key among them is a well-defined space by buildings. Great gathering places in neighborhoods can be equated to outdoor rooms. In our built habitats we have a natural instinct as human beings to desire enclosure. Think about young children and how they love to find spaces that are scaled to their size: a nook in window seat or a small fort under a table. The solvent of placemaking, however, is surface parking lots. We are not nearly as likely to stop our cars in the middle of traffic to have a conversation with a friend we encounter on our way somewhere as we would if we were walking on a sidewalk.

The historical city consists of background and foreground buildings, with prominent sites reserved for the most important civic buildings. Much of the navigability and collective identity of a city revolves around the clear distinction between public and private buildings. There is no mistaking the sacred importance of the appropriately sited acropolis in Athens, for example. By contrast, think of the values we are communicating to our children when we mistreat our landscapes through sprawl development for apparent economic gain. According to prominent urban theorists like Steven Peterson, there is a legibility of a great city that has an appropriate hierarchy of spaces and buildings.

Imagine, for instance, the sequence of moving through Boston from the most public plaza to the most private dwelling. You begin in a great public square, move down a grand boulevard, turn onto an avenue, cross over to a neighborhood street, enter into a semi-public forecourt, step inside of a semi-private lobby, go up a shared staircase, and lastly, arrive at your private apartment looking back over the city you have just navigated below. There is an appropriate use and density in the city associated with each shift in scale which continues to unfold inside your residence as you move from the most public to the most private rooms.

As demographic changes continue to push development toward walkable urban places, it is important to the success of these neighborhoods that the principles of walkability, placemaking, and a hierarchy of public spaces and civic buildings are at the forefront of Tulsa’s design strategies.

Click here to read Part I:  The demographic changes that have people clamoring for WalkUPs