To put the principles of WalkUPs into context, the following are key urban design strategies at the forefront of making walkable urban places today.

This is an idea that has been in the movement from the beginning, but it remains vital to the growth of communities today. A TOD is a development centered on public transit access. From a sustainable practice point of view, clustering development around transit nodes allows for the creation of higher density settlements that can support commercial and economic activity while preserving as much rural land as possible. Columbia Heights is a successful example of a recent TOD development in the heart of Washington, D.C., that was revitalized through the creation of several new mixed-use buildings in partnership with the Washington Metropolitan Area Transit Authority. 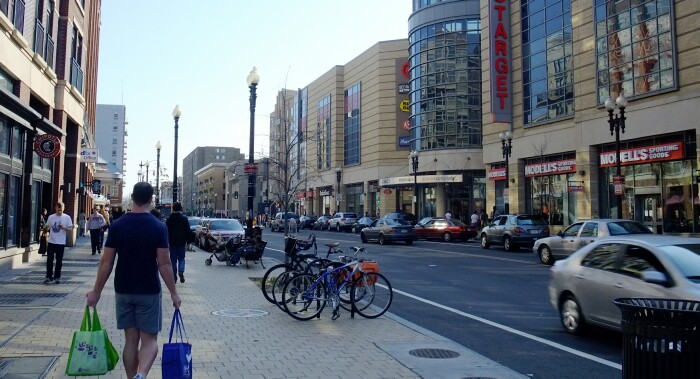 The area was devastated by the 1960s race riots and has since undergone a rebirth with the creation of a new public plaza and gathering place that hosts a weekly farmer’s market and supports large and small retailers alike.

“One of the more impactful things that is happening nationwide is that some of the historically worst offenders in terms of auto-dependent sprawl are now conforming to appropriate urban design standards and are massively profiting from it.”

For instance, the new Target store in Columbia Heights (which is a multi-level store that starts on the second floor of the building and has below-grade parking) is now the highest grossing Target store in the country.

In the past fifty years or so we have been designing our streets with the sole intention of moving as many cars as fast as possible through our streets. This has had many unintended consequences: from safety issues, to the alienation of pedestrians and cyclists, to the exporting of value out of the heart of our cities into the hinterlands. The idea behind complete streets is to do all things well on a street: to move traffic, to allow for walking, biking, and create highly visible and desirable commercial frontage. 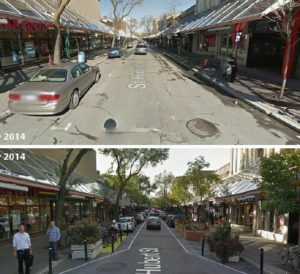 Sometimes, but not always, introducing a better streetscape involves “a road diet” – taking instances where there are far too many lanes of traffic and introducing on-street parking, planters for trees, bike lanes, wider sidewalks, light fixtures, benches, etc. This is not being done solely for aesthetic appeal. Beautiful, two-way streets provide much better exposure and success rates for retail, and on-street parking slows cars and provides a buffer between pedestrians and vehicles, making people feel safer.

Walkable streets have a huge economic impact on an area. A 2014 nationwide study found that “rents for commercial spaces in walkable districts inside otherwise car-dependent suburbs command a 74 percent premium over non-walkable areas”.[1] The safety statistics involving our roads are the most telling on this issue. Car crashes are the largest cause of death among teenagers in America. Most young drivers are involved in at least one serious auto accident between the ages of sixteen and twenty.[2]

Simply posting lower speed limits does no good, as it is proven that motorists will drive not according to the posted speed, but according to the design speed of the street. Wider lanes and streets without on-street parking mean faster and more dangerous speeds. The threshold for fatal accidents when collisions involve cars and pedestrians spikes at 20 miles per hour.[3] The key to moving cars efficiently is not moving at fast speeds only to stop frequently at traffic lights, but to have slower moving cars flowing at a more constant rate.

A common concern one hears raised in public meetings is that downtowns are not safe. While crime does occur in public spaces, it is a perception of crime that is often mistaken. The most effective tools for crime prevention have been studied and enumerated in what is known as Crime Prevention Through Environmental Design (CPTED). The ideas came about in the 1970s and are often credited to Jane Jacobs and Oscar Newman. One of the most important principles is having what is called “eyes on the street”. That is to say, well-populated streets are the safest. So are environments where people feel ownership and where they are encouraged to take an active interest in watching out for what is happening on the street. Many elements instill this feeling of ownership from well-located windows to front porches to well-lit spaces. Not only does increasing density in an area enhance the active street life, but more foot traffic and eyes on the street fundamentally change the real and perceived safety of a neighborhood.

With the economic changes that we are now confronting, a growing problem in America is what to do with our decaying strip commercial centers when they have outlived their 20-year useful lifespan. Sprawl retrofit looks at places like abandoned malls surrounded by a sea of parking and finds ways of transforming these areas into viable neighborhood centers connected by public transit. A good example of this transformative process over several phases is Mashpee Commons in Massachusetts. There are two wonderful books on the subject for additional reading: Sprawl Repair Manual by Galina Tachieva and Retrofitting Suburbia by Ellen-Dunham Jones.

Tactical urbanism is an on-the-ground engagement process whereby an energetic group goes out and makes real change visible in the community with very little resources. For instance, tactical urbanism groups famously began taking over public parking spaces showing how they can be reclaimed for alternative uses by putting money in parking meters, rolling sod on the parking space, setting up potted trees and plants, and placing benches for people to sit. 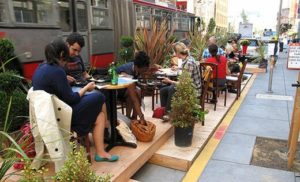 In New York City, pop up café seating has proven to be more profitable than parking. Others have made lasting impacts by demonstrating the potential of change through the simple process of painting by hand new curb bump outs to make intersections easier for pedestrians to cross or new on-street parking spaces. In Memphis, local residents of Broad Avenue collected $20,000 for paint, went out and re-painted the street to reduce the size of the lanes and add bike lines and parking. The change was so well received by the neighborhood that substantial commercial investment followed on this same street and the city was able to invest in the permanent transformation of the street. We have reached an exciting time of transformation in Tulsa and in the region. We made the list of the top 52 places to visit in 2015 because of the wise architectural investments we have inherited from our past.

What will be our chances of making that list in future generations if we do not engage again in the principles of making quality walkable, mixed-use neighborhoods? The demand for WalkUPs is widespread, the principles for making great neighborhoods have been tried and tested, and the lessons from urban design strategies implemented across the nation are many. The potential for Tulsa is great indeed.

Click here to read:  Part I – The demographic changes that have people clamoring for WalkUPs

Click here to read:  Part II – What makes for a great WalkUP?

[3] Graph of speeds from www.nhtsa.gov or chi.streetsblog.org.