Cycling is growing at warp speed – both here and all across America.  And it’s not just for fun and recreation because cycling could well be at the core of a lean, but seismic health care transformation – especially for kids and older adults.

There is a whale sized predicate for growth here.  Green Country has one of the most fully executed, best-planned and well-funded bike/multi use trail system in the country. With over 120 miles of trails for bikes and pedestrians and several partially or fully funded plans for an expanded multi-use path system of over 200 miles, we have one of the best systems of any middle-sized city in the U.S.A., Portland and a small handful of other communities being possible exceptions.

INCOG, the regional planning agency in northeast Oklahoma was charged several years ago with orchestrating a publicly funded series of citizen meetings, consulting engagements and analytic studies to ratchet up Green Country’s bicycle/pedestrian infrastructure and use.

Branded as the “GO Plan” the agency has crafted an imaginative pedestrian and bicycle agenda that will surely take us to the next level.  Viplav Putta and James Wagner, INCOG’s transport planning gurus, are core players, as is long time Tulsa trail advocate and INCOG chief Rich Brierre. They are joined by a consultant and Jennifer Haddaway, who works on many of these issues together with a fascinating cast of citizen/volunteer participants including Jamie Jamieson, Bill Leighty, Gary Parker, Nathan Leigh, Mike Wozniak, J.D. Walker, Joani Dotson, Stephen Lassiter, Mike Schooling and Jane Ziegler.

Part of their thinking: making cycling a bigger piece of our transportation and fitness portfolio entails getting companies, public agencies and non-profits to provide showers and bike lockers at and near work places, better bike/transit connections, super shops and places with safe access to bike parking.  By adding additional on-street bike lanes and creating more street / trail linkages, the city can close the gap on what has been considered an anemic bicycle-pedestrian transportation mode share.

The GO Plan, has been a very transparent and thorough process and now awaits funding mechanisms from the communities involved, which could come soon.

As T-Town’s annual cycling extravaganza, the Saint Francis/Tulsa Tough race gets underway it is an ideal time to reflect on how we can capitalize on this excitement and growth of the sport.  With over 2,000 race participants in each of the last two years, and an estimated 60,000 spectators last year the immediate economic impact spawned by this intensely colorful and hyperkinetic contest is profound and may soon approach $2 million.

Lots of new and agile bike industry players, the advent of 3D printing of cycling parts and systems, advancing use of ultra-light materials and tight integration of cycling with a slew of body “state” sensing technologies are well underway.  And there is a stout health care re-think of the heavy impact that even causal cycling can play in obesity mitigation – especially among children of color.

Taken at one go, these vectors combine to present enormous opportunities for improved quality of life and health outcomes as well as economic development prospects that must not to be overlooked.  This inflection point and the need for a collective response demands a keen analysis of the solid return on investment possibilities of adequately funding bicycle pedestrian infrastructure improvements, both now and in the future.  Let’s hope that our elected officials recognize these benefits and prioritize them when crafting the Vision 2025 extension.

The Quantified Self & Cycling

Medical researchers have been feverishly interested in outfitting bikers with wearable sensors that can track key facets of human metabolism.

We are presently experiencing a deeply personal and sophisticated period in American medicine – some call it the “Quantified Self” revolution. Imagine being routinely tethered to an array of biosensors and remote-sensing gear, together with smartphones, to continuously track blood pressure, heart rate, even blood chemistry, including a set of simple brain metrics that will also be sampled and recorded. Imagine further having an interactive, vibrant connection to healthcare counselors, your doctors, and to nutrition and fitness consultants tied into this data sea – all part of a revolutionary health care strategy.

With these looming advances in mind, I spoke recently with Tom Brown of Tulsa’s eponymous Tom’s Bikes about the rapidly changing equipment and dynamics of cycling.  Mr. Brown and I also surveyed the evolving technology cloud that defines bicycling in America.  We talked specifically about ICEdot, a family of new bike safety sensor and crash notification technologies being developed by the Tulsa-based company.

Typically the company’s crash sensor is mounted on a helmet and when married to a smart phone becomes a live sensor that measures drastic changes in forces and kinetics – the kind of big disruptions that a biker typically experiences in the course of a crash or bad fall. The device, if it detects a radical change in a riders orientation or acceleration- will automatically notify an emergency medical team, relatives and significant others on the rider’s behalf. Interestingly the ICEdot helmet is only part of a rapidly expanding ecology of body sensor gizmos that can track human activity levels and key metabolic functions. Apple’snew watch will, given the live demos I’ve witnessed and lots of engineering reviews, dramatically advance the state of play of many of these sensing devices. Some analysts believe this so called revolution could become a multimillion dollar part of the sports medicine/biosensors industry within the next few years. Because the whole arena is new and developing, Tulsa could be an alpha party in the maturation process of these shifting economic currents. 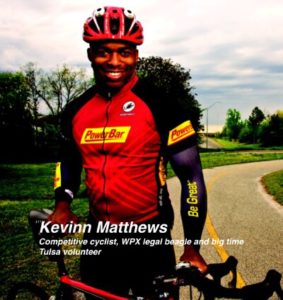 With that said, let’s not forget the intrinsic value and benefits cycling provides on a very human scale to growing numbers of enthusiasts embracing the sport.  Take for instance, Kevinn Matthews, an attorney for health and safety at WPX Energy.  Often before the sun rises you might find Kevinn stretching in the parking lot of a gym that has yet to open and then after work later that same day he will likely embark on a 90 minute bicycle ride.

Matthews has also trained for what he calls his “other job”—sprint cycling.  The sport challenges two cyclists who ride 1,000 meters around an enclosed track, pacing themselves until the last 200 meters which are timed.  Over the first 800 meters riders often position themselves behind their opponents to conserve energy and improve aerodynamics, testing competitor’s endurance.

Matthews considers sprint cyclists the gladiators of cycling.  As graduate of the College of Architecture, Art, and Planning at Cornell University, Matthews devotes much of his free time to cycling.  Even with his many hours of high-speed training, he still appreciates a lazy ride around the neighborhood. “I can hop on a bicycle and cruise, and it makes the world a little easier,” he says. “It’s all still riding a bike.” Obviously his love and passion for the sport is shared by literally thousands of other Tulsans, and that is precisely why Tulsa is now on the cycling radar screen both nationally and internationally.