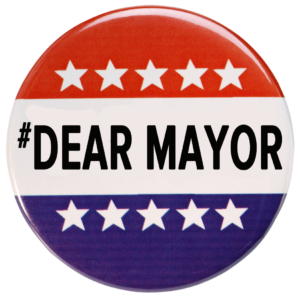 what happens when a community with a strong mayor form of government elects a weak mayor?

Determining the political and policy differences between the leading mayoral candidates begins by looking at what they agree on. All three support improvements in the delivery of most of the city’s so called core services, including police and fire protection, sanitation, water, streets, and ambulance service to name the most obvious.

The one exception is that only former Mayor Kathy Taylor apparently views public transportation as a core service; providing mobility options to low income citizens and choice riders who need it to get to work, school and shopping. Other than that there is little debate between the three candidates when it comes to supporting what most citizens consider essential government services.

That said, it’s puzzling why the candidates spend so much time and expense on campaign ads and materials emphasizing these core functions when so little separates them; at least in campaign hype or rhetoric on the importance of these issues.

When it comes to substantive facts however, it is hard to argue with Taylor’s leadership and proven track record of fighting crime, particularly violent crime through initiatives like “Building a Safer Tulsa”, anti-gang prevention programs, Tulsa Youth Intervention Program, Mentoring to the Max and CompStat to name but a few.

On the other hand Mayor Bartlett appears to be on the defensive in trying to explain an alarming increase in homicides that threaten to set an all-time record in 2013 after years of steady decline. When it comes to public safety Bill Christiansen’s service on the City Council is more talk the talk than walk the walk.

Yes, we all want safer neighborhoods, less gang violence, smooth streets, safe water and dependable trash service. That is a given.

What voters really want to know is how these candidates will build community by balancing the interests of developers and neighborhood advocates. They want to know what role the candidate’s envision for city government in enhancing the quality of life for its citizens.

Voters want Tulsa’s next mayor to possess and articulate a vision for Tulsa’s future. They want to know which candidate can counter decades of stagnate population numbers by crafting a global growth engine and development strategy that will propel Tulsa into the kind of energetic, progressive and sustainable community that attracts capital, businesses, creative talent and tourists.

The traditional brick and mortar drivers of economic growth in the past are outdated and being replaced by an economy based upon brains and creativity.We must differentiate ourselves from the competition by illuminating our workforce’s ability to create and absorb skills and innovation rather than rely upon traditional drivers like natural resources, physical labor or manufacturing prowess. TCC’s StartUp Cup sponsored by the Lobeck Taylor Family Foundation is a good example of what is needed.

Tulsa has fallen behind and we need a leader who can help us move forward. We must attract a workforce and talent pool with the skills, aptitude, knowledge, and creativity sought by the companies most likely to create new jobs and drive economic growth and activity. This is the real challenge for our next mayor and this is where there are well defined differences between Kathy Taylor, Bill Christiansen and Dewey Bartlett.

Dewey Bartlett has an absolutely abysmal record of visionary thinking, ideas or initiatives. He has literally been sleepwalking through his term, allowing the more progressive Mayor’s and cities we compete against to further distance themselves between us and the growth we seek.

Bartlett has been little more than a caretaker while in office, bragging about managing city affairs that any competent staffer could easily do. He has all but completely ignored our relatively new comprehensive plan. He has exhibited no energy, no imagination, and no creativity. He has been a do-nothing Mayor along for the ride and that is being charitable.

So what about former City Councilor Bill Christiansen, what is his ‘vision’ for Tulsa? Apparently, he has none because he has given us no details. His entire campaign has been focused on the tired and most overworked campaign cliché’s in political history: “I will be mayor for all Tulsa,” “I will roll out the red carpet, not the red tape.” How original. Seriously Bill, is that your vision? Dewey used the exact same cliché’s in his first campaign four years ago?

For either of these candidates to suggest that they are more closely connected, more sympathetic or more profoundly determined than Kathy Taylor to serve Tulsa’s minorities or underserved populations, including women and seniors is nothing short of laughable.

All three mayoral candidates have plenty of experience serving in government. The difference between them is the leadership they have demonstrated while in office. So, let’s summarize our choices.

Mayor Dewey Bartlett’s dismal record of underachievement and his list of missed opportunities are the hallmarks of his lethargic and lackluster performance.

Bill Christiansen is at such a loss for ideas that his entire campaign is based on negative robo calls, personal mudslinging and baseless and unsubstantiated charges attacking his opponents. In his desperation to force a runoff he has completely abandoned any attempt to offer creative solutions to the enormous challenges facing the city.

Kathy Taylor has continuously demonstrated her capacity for advancing visionary ideas. She championed the development of a new comprehensive plan engaging thousands of citizens in the process. She also saved professional baseball in Tulsa while simultaneously sparking millions of dollars in new private investment downtown. Without her leadership, neither of these major accomplishments would have become realities.

Kathy Taylor is a principled person with big ideas and a bold vision for creating a community with a vibrant and sustainable economy which attracts young people and provides transportation and housing choices in walkable neighborhoods.

In short, Kathy Taylor is energetic, enthusiastic, disciplined, focused and tough as nails. Bottom line: She gets things done!