What Happened to Tulsa’s Passenger Rail Service? – Part I of II Some historical background

The trees between Tulsa and Oklahoma City are budding but Tulsa’s passenger train aspirations remain dormant.  Nature is taking care of the trees; however, Oklahomans must warm up what has turned cold with regard to the state’s passenger rail service.

July 1, 2016 marked the 20th anniversary of the Oklahoma Tourism and Passenger Rail Act [§66-321 through §66-325].  As defined in state statute, ’Passenger rail service… shall mean interstate or intrastate passenger rail service, including but not limited to a route linking stations in Oklahoma and Tulsa Counties with other primary points in the national railroad passenger system’.  So, advocates have the law behind their aspirations.

A Brief history on Oklahoma passenger rail since 1999

Step back a bit and consider the progress to date.  Oklahoma City received its connection to the nation’s rail network in 1999 through the establishment of the Heartland Flyer.  The Heartland Flyer operates daily between Oklahoma City and Fort Worth with intermediate stops in Norman, Purcell, Pauls Valley, Ardmore, and Gainesville, Texas.

The train also provides transportation beyond Fort Worth with connections to all four corners of the continental United States and Canada.  Through efforts of the Chickasaw Nation, The Oklahoma Department of Transportation (ODOT), and Amtrak, a new stop will soon be established on the Oklahoma-Texas border at Thackerville for the WinStar Casino.  A second Heartland Flyer frequency is also being discussed.

Combined, the states of Oklahoma and Texas pay Amtrak $5.3 million each year as a passenger rail service contractor for Heartland Flyer operation. These subsidies have drawn a number of critics in the state legislature who fail to recognize their overall economic benefits when compared to the costs.

These critics see the state appropriation as simple lost tax revenue that could be used for other important services such as education or highway maintenance.  Yet they miss an important point when they deride the annual state revolving fund appropriation.   The Heartland Flyer is as much an economic tool as it is transportation.  From a fiscal perspective, the Heartland Flyer supports these economic benefits.

How is that you ask?  Heartland Flyer travelers spend millions of dollars at local attractions, restaurants, and hotels each year.  Of this amount, approximately one million dollars is collected in local sales taxes.

This consumer spending (not the generated tax revenue) far exceeds the annual subsidy required to support the service.  This is part of the economic lifeblood that keeps small town Oklahoma alive.  ODOT, the legislature and Governor Fallin can and should do more to expand this service to support tax revenue generation and promote associated transit oriented development.

What happened to Tulsa’s service?

Layout of state railroads prevented a quick turnaround for Tulsa in 1999.  The rail line linking Tulsa and Oklahoma City existed in a dilapidated condition when the Heartland Flyer began.  The route was barely capable of handling 10 mile-per-hour freight trains between Oklahoma City and Sapulpa.

Deterioration occurred through years of neglect from its previous owner, the BNSF Railway.  Therefore, passenger train operations were impractical and in fact prohibited by federal track safety standards when the Heartland Flyer began operations. 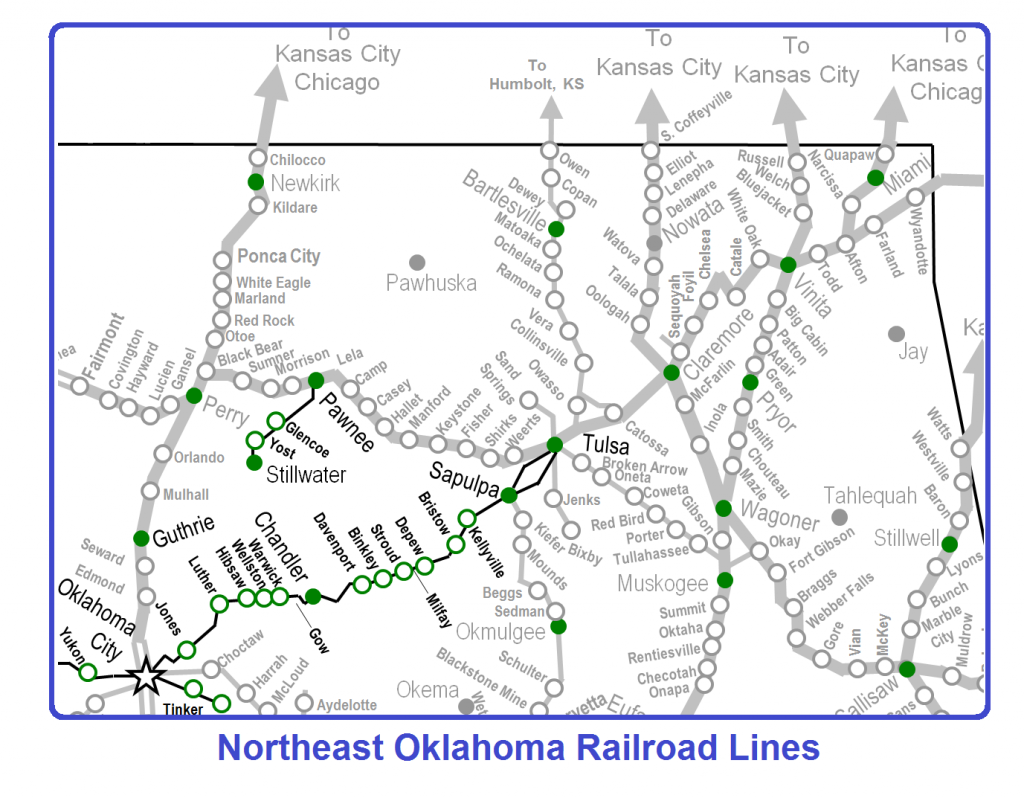 Oklahoma City received its train seemingly overnight because the 206-mile route between Oklahoma City and Fort Worth was in excellent condition when the legislature passed and Governor Keating signed the Oklahoma Tourism and Passenger Rail Act in 1996.

Only $2.6 million of $23 million secured by US Senator Don Nickles through the Federal Taxpayer Relief Act of 1997 was required to rehabilitate what would become the Heartland Flyer route.  In contrast and at the time the estimated repair bill for the 118-mile Oklahoma City to Sapulpa line was $90 million.

So, the logical first step was to start the Heartland Flyer and firmly establish its viability.  At that point political influence would be leveraged to harvest additional funding from federal and state levels to improve the track to Tulsa.  Tulsa would simply have to wait.

Heartland Flyer in Norman, Oklahoma during the busy summer season (2005)

Indeed, Tulsa was not forgotten.  Undaunted, the legislature and ODOT continued progress toward Tulsa.  In 1998 BNSF was rumored ready to scrap the Oklahoma City to Sapulpa line.  This line was, and remains today as the only direct rail link connecting the state’s two largest metropolitan areas.  So, the state approached the railroad and purchased the 97.5 mile rail route.

ODOT wasted no time.  The state agency immediately flipped the property by lease to the newly formed freight carrier, Stillwater Central Railroad.   The state lease included a unique stipulation.  The Stillwater Central was required to rehabilitate the route in preparation for passenger rail service.  The following is contained within the 1998 lease contract:

“…one of the goals of the STATE’, acquisition of the Leased Properties is to allow for the establishment of regular and continuing passenger service for the public, and RAILROAD agrees to cooperate fully with STATE’s efforts to establish such service.”

Over the next sixteen years the Stillwater Central rehabilitated the rail line under contract by installing 160,000 new railroad ties and resurfacing the rail line.  It also rebuilt a customer base.

Today it is a busy railroad.  The lease and rehabilitation was so successful it caught the attention of an unexpected railroad.  In 2012 a BNSF Railway official asked ODOT to sell the railroad back.

To the chagrin of many, state transportation leaders agreed the line should be sold, despite the original legislative intent.  Advocates protested by maintaining the original purchase intended to preserve and protect the line perpetually under state control.

Still, in May 2014, a shocked BNSF Railway contingent at the Oklahoma Transportation Commission (OTC) watched as the corporate behemoth placed second in a bidding contest for the railroad behind Stillwater Central.  Closing occurred on August 4, 2014 with the state collecting $75 million.  Ironically, the BNSF Railway is again using the line through a track lease agreement with the Stillwater Central.

Unfortunately, the state legislature and Governor Fallin raided what was left of the windfall.  In 2016 approximately $50 million was transferred from the state railroad rehabilitation fund to fill a portion of the legislatively generated $1.3 billion budget hole.

Yet provisions of the 2014 sale contract remain of interest to Tulsans.  By agreement further Stillwater Central rehabilitation has occurred.  Upgrades have been made to support Federal Railroad Administration (FRA) Class-3 speeds (60-mph for passenger trains).  A pilot commuter rail project must begin by August 4, 2019 or the Stillwater Central will forfeit to the state an escrow account of $2.8 million, called liquidated damages.  While this amount is considered a slap on the wrist, the passenger service easement will also revert back to the state if the pilot project does not run.

Watch for Part II:  What’s next?

See these related articles about the Sooner Sub and Tulsa to OKC rail service:

MAKING THE CASE FOR THE SOONER SUB

BAND TOGETHER TO SAVE THE SOONER SUB

Evan Stair is the President and founder of Passenger Rail Oklahoma. Established in 2001, Passenger Rail Oklahoma is a grass roots advocacy organization dedicated to the preservation and expansion of passenger rail service in Oklahoma and the surrounding region.  He holds undergraduate degrees in Electronics Engineering Technology and a Masters of Science in Electrical Engineering, all from Oklahoma State University, Stillwater.

Stair continues spending significant time at the state capitol, exposing legislators and the governor to the economic importance of preserved and expanded passenger rail service.  He has provided countless presentations in the states of Oklahoma, Nebraska, Kansas, Colorado, and Texas regarding the importance of civic involvement to retain and expand passenger rail services.