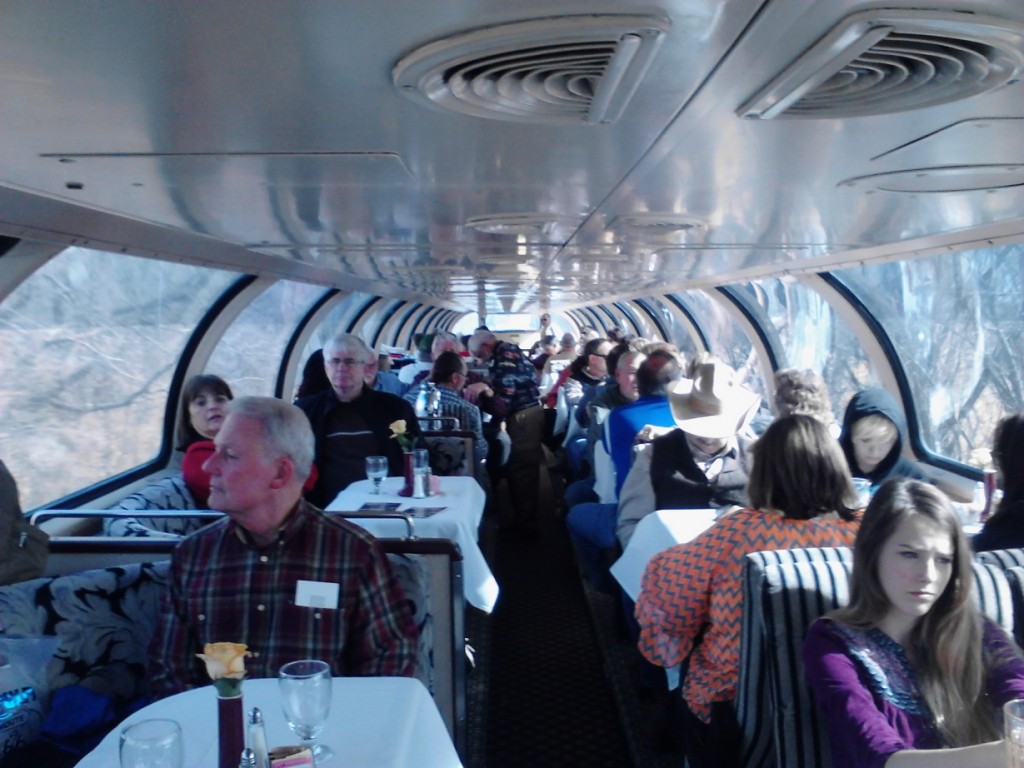 This is Part 2 of a 2 Part Series.  Click here to read Part 1 if you have not already done so, to better understand Part 2.

Is there demand for commuter rail service between Tulsa and Oklahoma City?

Evan Stair and Passenger Rail Oklahoma believes so.  In February 2014 three sold out Eastern Flyer demonstration trips were offered between Sapulpa and Oklahoma City.  The trips were incredibly popular with all tickets selling in ten days with only word of mouth and limited social media marketing.

So impressed was Iowa Pacific Holdings, the demonstration operator, they offered to immediately begin regular service.  However, the proposed sale by the state of the Sooner Sub line connecting the cities interfered and the Fallin administration refused to allow any carrier on the route until the sale was closed. (shown left: Eastern Flyer Demonstration Train Dome February 15, 2014.  Photo by Evan Stair)

After closing, Iowa Pacific partnered with the Stillwater Central as a passenger rail service provider.  A late 2014 start date was announced.  Members of the Tulsa City Council requested ODOT ensure they received rail service.  Then the inaugural date slipped as the entrepreneurial rail carrier stepped away to take over some responsibilities of a failing Amtrak route in Indiana, the Hoosier State Train.  The start was delayed further as the inaugural Eastern Flyer service plan was questioned by the City of Oklahoma City. 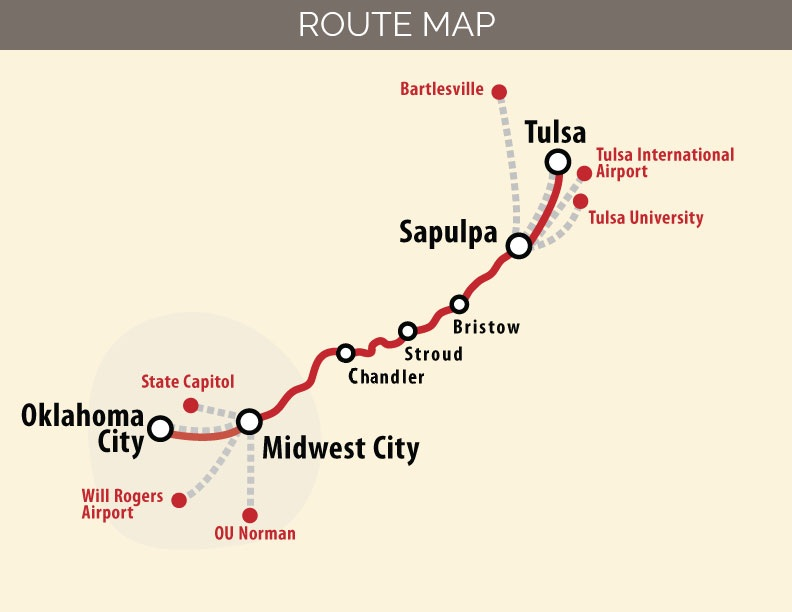 So, the luxury shuttle buses were intended to bridge the dilapidated railroad service gap just to begin the project and develop interest.  Upgraded full rail service would be Tulsa to Oklahoma City, from downtown to downtown, at a later date.

Unfortunately, the most recent significant action was nearly two-years ago

The City of Oklahoma City became involved in May 2015.  Three council members contacted Iowa Pacific indicating city support was contingent upon reaching downtown Oklahoma City and Tulsa exclusively by rail.  Iowa Pacific agreed, and the city approved a resolution to fund a Union Pacific Railroad capital improvement study to repair 4.2 miles of Union Pacific track between Midwest City and downtown.  To date the city has not acted upon the September 2015 resolution.  This was the last official action taken to bring passenger rail service to Tulsa.

The situation continues to evolve oh so slowly 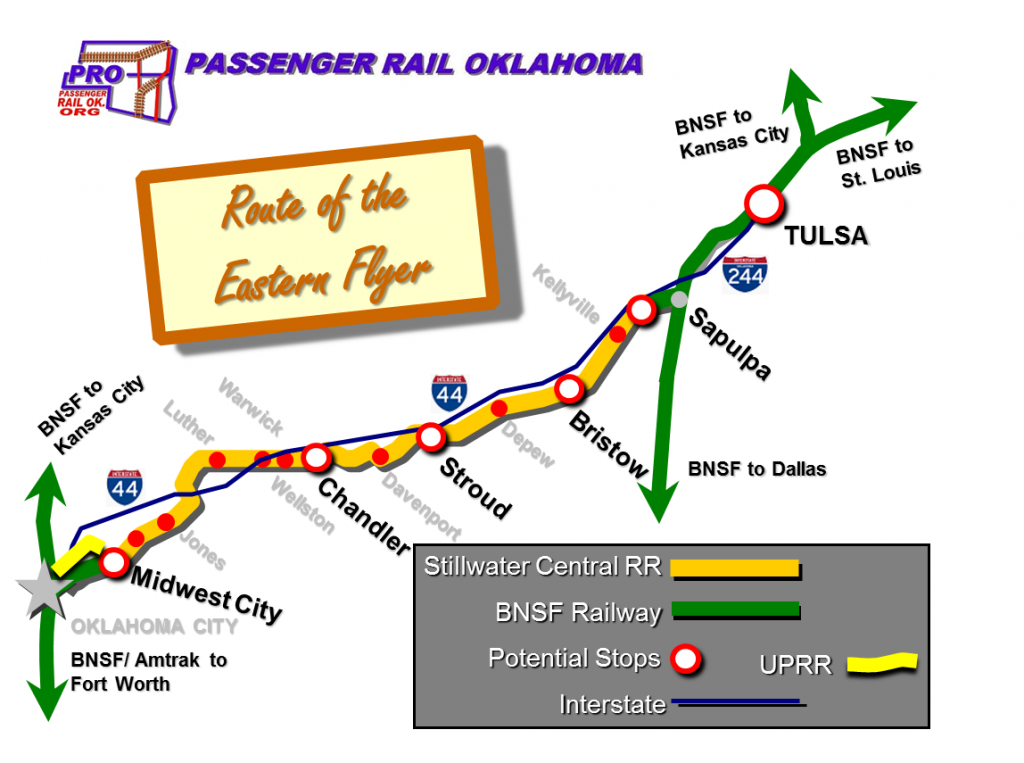 Coincidentally, the City of Oklahoma City broke ground on February 8, 2017 for a new Downtown Streetcar system.  The Heartland Flyer continues to be caught between rapidly increasing Amtrak contractual costs and legislative pressure to reduce appropriations.  Elections continue to transform federal, state, and local governments.  It seems the Eastern Flyer project has taken two steps back and is immobilized on the back burner.

What needs to be done

Since establishment in 2001, Passenger Rail Oklahoma membership has observed and participated in various rail initiatives.  Many have been unsuccessful, but a few have reached a point of successful conclusion.  Our organization has the institutional background necessary to propose methods required to revive the Tulsa initiative.  We understand the best practices and why some initiatives have been successful and others not.

To date the Tulsa initiative has been disjointed; fraught with various civic committees and task forces, lacking a single unifying leader to steer development.  The corridor communities have not been engaged simultaneously in a cooperative, accountable process where milestones are set and members held accountable.

Many do not even understand what can be achieved through such a project and why the project is important.  A generation has passed since Tulsans had the choice of driving and taking the train.  The choice has been removed from collective societal memory.

So what needs to be done?  Stakeholders must first understand the economic power afforded through transit oriented development.  They must commit to contributions within a strong cooperative organization for mutual benefit, not burden the initiative with a competitive intercity rivalry.  A respected, high-profile leader/project manager must emerge who understands the importance of the initiative to future economic sustainability if not corridor survival.  Consider these essential tasks:

The state stands at a point of government collapse due to revenue failures.  While it would be disingenuous to claim the Eastern Flyer will bring the state back to prosperity, it can play a role.  Economic experts agree Oklahoma must diversify its energy sector economy.  Attracting new business demands more flexible public services, even if they are derived from public-private partnerships.

The transportation revolution is now in full swing nationally.  The Oklahoma City Streetcar project will be a game changer for that community.  It is time for Tulsa leaders to at a minimum begin planning for their transportation revolution through the restoration of intercity service initially between Tulsa, Oklahoma City, and Fort Worth with a future vision to Kansas City and Chicago.

What can you do to help?

What is needed most is leadership from a high-profile elected official to orchestrate a plan to move forward and realize this 16 year dream of passenger rail service connecting Oklahoma’s two largest metropolitan areas.  Four-term Mayor Mick Cornett of Oklahoma City has declared that he will not seek re-election in 2018.  That leaves Tulsa Mayor G.T. Bynum as the logical choice to take on the task of developing and managing a strategy to move Tulsa to OKC passenger rail service forward.  He might well be more inclined to take on this responsibility if enough Tulsans encourage and support him in this effort.  You can email him here:  mayor@cityoftulsa.org

See these related articles about the Sooner Sub and Tulsa to OKC rail service:

WHAT HAPPENED TO TULSA’S PASSENGER RAIL SERVICE? – PART I OF II

MAKING THE CASE FOR THE SOONER SUB

BAND TOGETHER TO SAVE THE SOONER SUB

Evan Stair is the President and founder of Passenger Rail Oklahoma. Established in 2001, Passenger Rail Oklahoma is a grass roots advocacy organization dedicated to the preservation and expansion of passenger rail service in Oklahoma and the surrounding region.  He holds undergraduate degrees in Electronics Engineering Technology and a Masters of Science in Electrical Engineering, all from Oklahoma State University, Stillwater.

Stair continues spending significant time at the state capitol, exposing legislators and the governor to the economic importance of preserved and expanded passenger rail service.  He has provided countless presentations in the states of Oklahoma, Nebraska, Kansas, Colorado, and Texas regarding the importance of civic involvement to retain and expand passenger rail services.