What is Smart Growth? 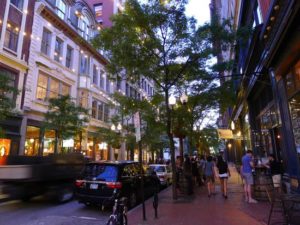 Smart growth, is an urban planning and transportation theory and practice that concentrates growth in compact walkable urban centers to avoid sprawl. It also advocates transit-oriented, walkable, bicycle-friendly land use, including neighborhood schools, complete streets, and mixed-use development with a range of housing choices.

Smart growth values long-range, regional considerations of sustainability over a short-term focus. Its sustainable development goals are to achieve a unique sense of community and place; expand the range of transportation, employment, and housing choices; equitably distribute the costs and benefits of development; preserve and enhance natural and cultural resources; and promote public health.

Smart Growth accepts that growth and development will continue to occur, and so seeks to direct that growth in an intentional, comprehensive way. Its proponents include urban planners, architects, developers, community activists, and historic preservationists. The term “Smart Growth” is an attempt to reframe the conversation from “growth” versus “no growth” (or NIMBY) to good/smart growth versus bad/dumb growth.

Proponents seek to distinguish Smart Growth from urban sprawl which they claim causes most of the problems that fuel opposition to urban growth, such as traffic congestion and environmental degradation. Smart growth principles are directed at developing sustainable communities that provide a greater range of transportation and housing choices and prioritize infill and redevelopment in existing communities rather than development of “greenfield” farmland or natural lands.

Some of the fundamental smart growth goals for communities and their residents are… increasing family income and wealth, providing safe walking routes to schools, fostering livable, safe and healthy places, stimulating economic activity, developing, preserving and investing in the built environment and natural resources.

One of the earliest efforts to establish smart growth as an explicit regulatory framework were put forth by the American Planning Association. In 1997, the APA introduced a project called Growing Smart and published “Growing Smart Legislative Guidebook: Model Statutes for Planning and the Management of Change.” The U.S. Environmental Protection Agency defines smart growth as “development that serves the economy, the community, and the environment. It changes the terms of the development debate away from the traditional growth/no growth question to how and where should new development be accommodated” 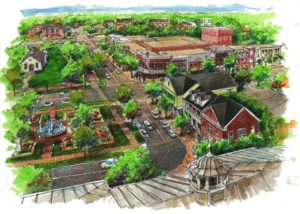 The smart growth approach to development is multifaceted and can encompass a variety of techniques.  In some communities, smart growth is enacted by a combination of techniques including increasing housing density along transit nodes, conserving farm land, and mixing residential and commercial use areas.

Perhaps the most descriptive term to characterize this concept is Traditional Neighborhood Development, which recognizes that smart growth and related concepts are not necessarily new, but are a response to an auto-centric culture and suburban sprawl. Many favor the term New Urbanism, which invokes a new, but traditional way of looking at urban planning.

There are 10 accepted principles that define smart growth:

Transportation and community planners began to promote the idea of compact cities and communities and adopt many of the regulatory approaches associated with Smart Growth in the early 1970s. The cost and difficulty of acquiring land, particularly in historic and/or areas designated as conservancies, to build and widen highways caused some politicians to reconsider basing transportation planning on motor vehicles. The Congress for the New Urbanism, promoted and popularized the idea of urban villages that relied on public transportation, bicycling, and walking instead of automobile use.

Smart Growth advocates maintain that much of the urban sprawl of the 19th Century was due to government subsidies for infrastructure that redistributed the true costs of sprawl. Examples include subsidies for highway building, fossil fuels, and electricity.

With electricity and other utilities, there is a cost associated with extending and maintaining the service delivery system, as with water and sewage, but there also is a loss in the commodity being delivered. The farther from the generator, the more power is lost in distribution. According to the Department of Energy’s (DOE) Energy Information Administration (EIA), 9 percent of energy is lost in transmission.

Current average cost pricing, where customers pay the same price per unit of power regardless of the true cost of their service, subsidizes sprawl development. With electricity deregulation, some states now charge customers/developers fees for extending distribution to new locations rather than rolling such costs into utility rates.

Growth is “smart growth”, to the extent that it includes the elements listed below. 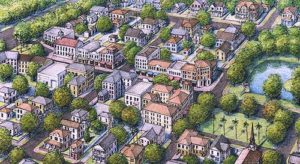 Compact, livable urban neighborhoods attract more people and business. Creating such neighborhoods is a critical element of reducing urban sprawl and protecting the climate. Such a tactic includes adopting redevelopment strategies and zoning policies that channel housing and job growth into urban centers and neighborhood business districts, to create compact, walkable, and bike- and transit-friendly hubs.

This sometimes requires local governmental bodies to implement code changes that allow increased height and density downtown and regulations that not only eliminate minimum parking requirements for new development but establish a maximum number of allowed spaces. 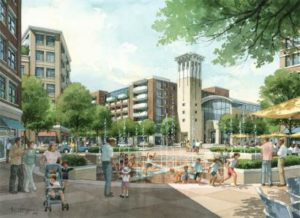 Transit-oriented development (TOD) is a residential or commercial area designed to maximize access to public transportation, and mixed-use/compact neighborhoods tend to use transit at all times of the day.

Many cities striving to implement better TOD strategies seek to secure funding to create new public transportation infrastructure and improve existing services. Other measures might include regional cooperation to increase efficiency and expand services, and moving buses and trains more frequently through high-use areas. Other topics fall under this concept:

Biking and walking instead of driving can reduce emissions, save money on fuel and maintenance, and foster a healthier population. Pedestrian- and bicycle-friendly improvements include bike lanes on main streets, an urban bike-trail system, bike parking, pedestrian crossings, and associated master plans. The most pedestrian- and bike-friendly variant of smart growth and New Urbanism is New Pedestrianism because motor vehicles are on a separate grid.