What is the Purpose of a City Street? If you said, “to move cars from point A to point B in the least amount of time,” you are not alone. 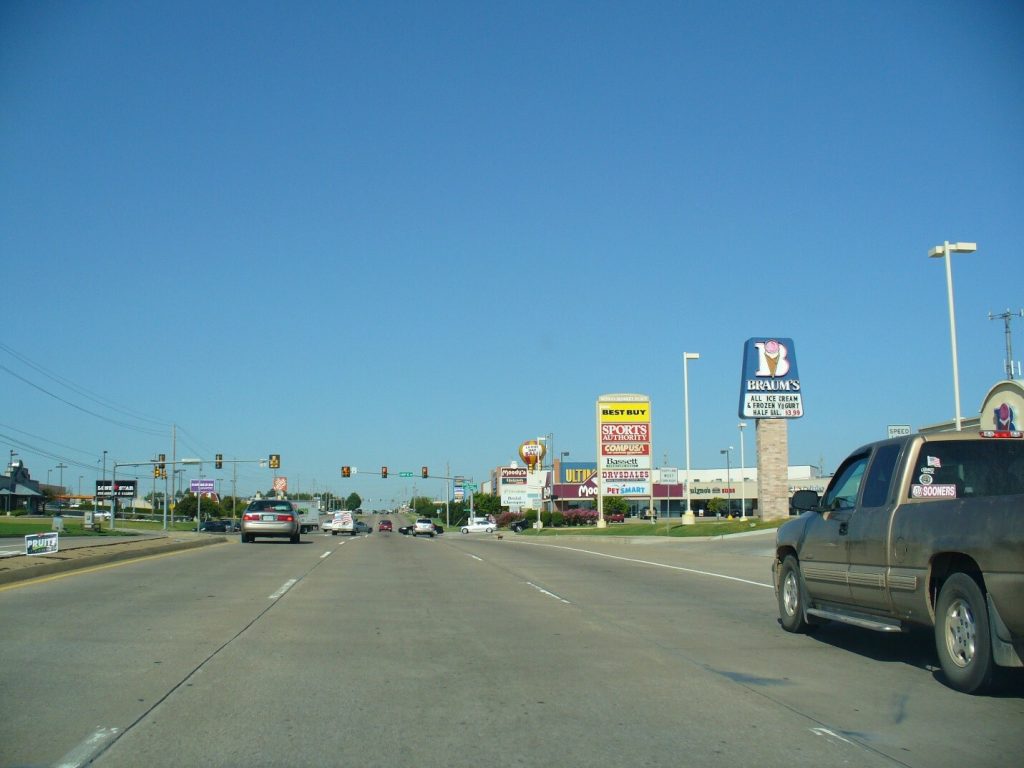 So what is the purpose of a city street?

It’s not something that most of us think about very much.

If you said, “to move cars from point A to point B in the least amount of time,” you are not alone.  Heck, you may even be a city traffic engineer. Especially in car-oriented places like Tulsa, city streets tend to be seen as a conveyance, allowing us—as long as we have a car—to get where we need to go.

Having attended the national Strong Towns Summit in Tulsa a few weeks ago, I can’t stop thinking about a different definition of city streets.

Why?  Because our future depends on it.

To better understand what I’m talking about, we need to clarify the difference between a street and a road.

Think about a road as a way to get from place to place. It should be fast and convenient, maximizing efficiency and helping you reach your destination in a timely manner. Notice how the definition of a road includes the idea of a “place.” A road connects places.

A street is not a road. A street is the framework upon which we build places. It’s not about speed.  It’s not about “getting there.”  If you’re in a place, you’re already there.  Thus, it’s imperative that streets serve the people in a place, not the cars speeding through it.  And because places generate jobs and taxes and opportunity, we should start thinking of streets not as conveyances, but as a platform for building wealth.

Stroads create an environment that is the worst of both worlds. Although they are built for speed with wide lanes and clear sightlines, it’s impossible to travel efficiently because we line them with destinations and access points, and then clutter them with stoplights to make them “safe.” 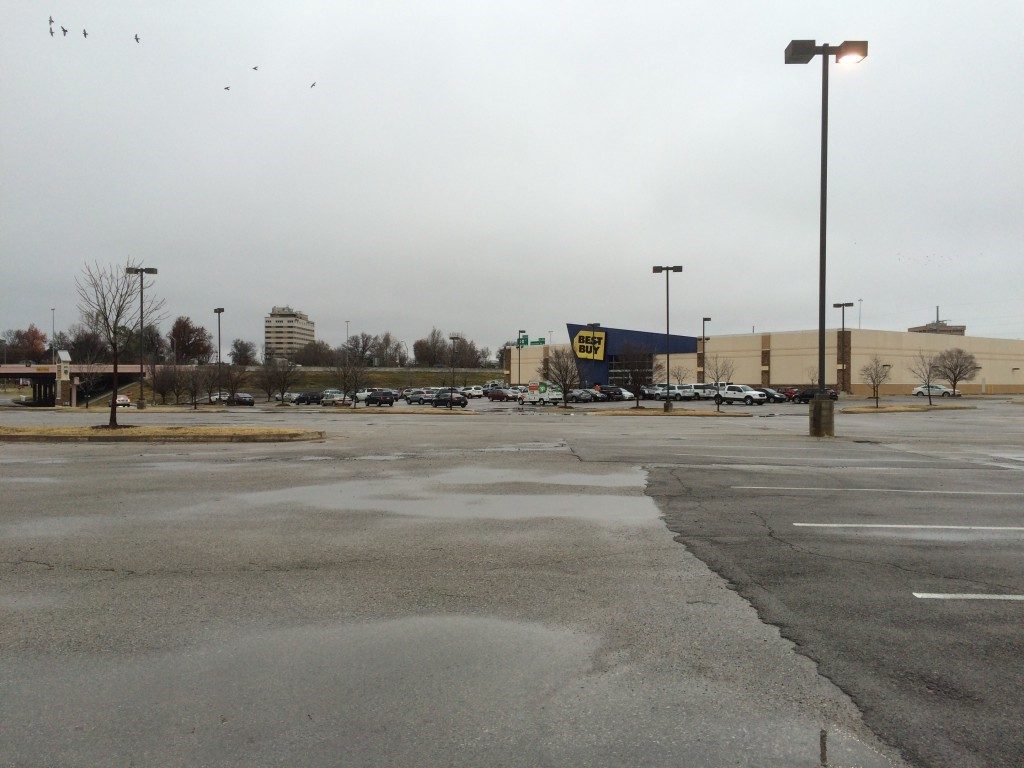 Would you like to take a romantic stroll around the Best Buy?

At the same time, a stroad can’t support a high-quality place because they’re not meant for people.

They are uncomfortable and dangerous for anyone not enclosed within the protective carapace of a car.  Because they prioritize auto-travel with lots of driving lanes lined with parking lots, the defining feature of a stroad is asphalt.  People who are brave or desperate enough to walk come in conflict with speeding cars, where the slightest distraction can prove fatal.  There is no “place” that welcomes you as a human being, where you’d be happy to get out and walk around.

Who cares? So what if everybody drives?

If you’ve been following local news recently, you’ve probably seen a lot of stories about municipal budget deficits, declining tax revenues, and our state’s ongoing failure to fund public schools.  If you care about any of that stuff, you need to start caring about what makes a great place.  Because great places generate revenue.  They also utilize public infrastructure dollars a lot more efficiently than the car-oriented developments we’ve been building for decades. 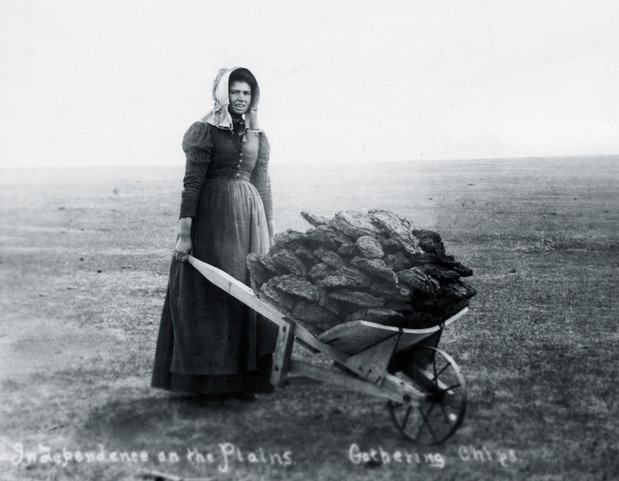 On the bright side, at least her taxes are low.

Part of the agreement we make as citizens is that we pay taxes and expect certain services in return.  Among the many benefits provided are roads, potable water, stormwater conveyance, wastewater treatment, schools, police, fire and ambulance services.  It costs money to provide public infrastructure and services, but they create value for the citizens and businesses that rely on them.

Concept 2: When everything is spread out, you need a lot more public infrastructure, which multiplies the costs and decreases the return on public investment.

When you design a transportation system solely for cars, you create a world where every private development must accommodate car storage. Unfortunately, parking lots have become one of the defining features of our city.  For decades, our zoning code has insisted that we provide more than enough parking for the busiest shopping day of the year.  And because parking takes up so much space, more than half our commercially zoned land sits vacant 364 days each year.

It also means that we’re spending a lot of money building and maintaining public infrastructure that serves a lot of empty space.  At its greatest moments of productivity, if we’re lucky, this land will receive a parked car once or twice a year.  In case you’re wondering how to maximize tax revenue and minimize public infrastructure costs per acre of land, this is not it.  We need a new paradigm.

The new paradigm is actually quite old.

Of course, the old guys who built Tulsa back in the early days did things differently.  They were following a successful pattern of development that had evolved over thousands of years: they built for people on foot.  As a result, they created incredibly efficient places that maximized revenues and minimized public costs.

Here are two real-life examples to demonstrate the difference between traditional and suburban developments. 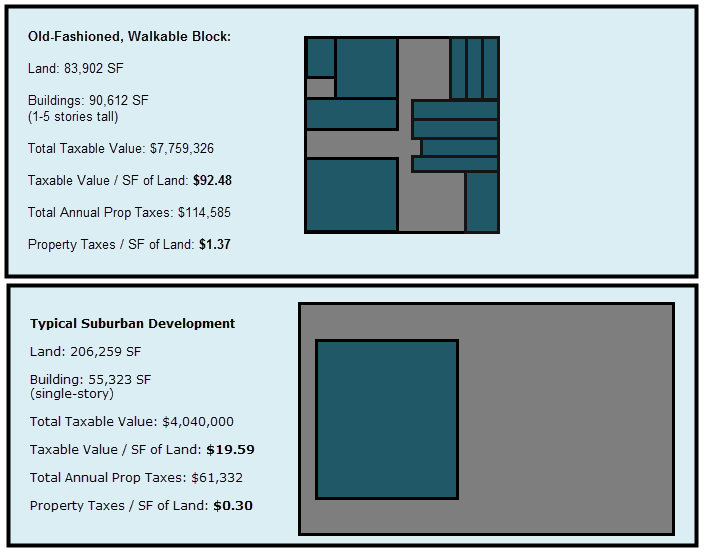 The old-fashioned block contains 16 parcels of commercial and residential space and utilizes less than half the land of the single-use suburban property.  Even with some vacant buildings and demolitions, the older block generates 4.5 times more property taxes per square foot of land than its suburban counterpart.  And while the old-fashioned block has evolved and changed, it continues to generate sales taxes from a variety of retail, restaurants and bars.  The large, suburban development, originally a grocery store, is now a gym and a coffee shop, generating little in sales taxes, but continuing to require significantly more public infrastructure due to its massive size.

Which of these two patterns appears to be more flexible, resilient and efficient over time?  Which maximizes the return on investment of public infrastructure dollars?  Which looks more like a place you could enjoy, even if you didn’t own a car.

In our older neighborhoods, we can use strategic, small investments to help create thriving places people want to be.  Fortunately, much of the work has already been done.  Compact streets with lots of uses and destinations per block create places where cars may be uncomfortable, but people can thrive.

When residential and commercial places are mixed, it’s possible to live near the places you need to go, which magically makes walking and transit a viable option.  When streets are designed for people on foot or bike, cars travel slowly, making them safer for everyone.  And, of course, when more people can be served by less public infrastructure, this creates enormous value to the city.

At the Strong Towns Summit, Kevin Klinkenberg argued that because we can’t fix everything, we should “triage” our cities to identify the places that can be great.  Inevitably, these are pre-war neighborhoods that are often undervalued and ignored.  But because they have good bones and were built for walkability, these are the places with the most potential for transformation.

Klinkenberg’s other advice is to start small and focus on excellence.  Mediocrity doesn’t change minds, but, by making a few places amazing, we will create a constituency of people who love terrific, walkable places and will advocate for more.

Which of these sites would be easier to transform into a great place for people? What small changes could have a huge impact?

The solutions won’t come from the top down, but from the bottom up.  But that’s the great thing about older neighborhoods.  You can do more with less.  It doesn’t take a multi-million-dollar project to make something better.  Sometimes a few simple interventions like fresh paint, street trees, park benches and some programed activities are all it takes to enliven a place and awaken community spirit.

One of my favorite presentations at the Strong Towns Summit was Jason Roberts from the Better Block Foundation.  He’s made a career of helping cities create great places for people, based on creativity, imagination and affordable materials.  We could learn a lot from him about how to activate the potential in our older neighborhoods.

By focusing our energies on older places that are inherently walkable and already served by existing infrastructure, we can increase quality of life along with tax revenues while building great places people love.

Sarah Kobos is an urban design nerd and community activist whose superpower is the ability to transform almost any topic into a conversation about zoning. Whenever possible, she explores other cities and writes about urban design and land use issues at AccidentalUrbanist.com and StrongTowns.org.